It official! The cost of a dry lab inkjet print is 11 cents! Well, semi-official. In an informal kind of way. For HP printers at least. If you don’t haggle…

Dry lab technology – be it inkjet or dye transfer – has had a halting start in the Australian and New Zealand markets. Severe discounting by Harvey Norman and Big W from the very start of the transition to digital photography has had the dual impact of discouraging photo specialist retailers from investing in what has been turned into a low-margin segment of their business; and creating an environment in which retailers are more concerned than they perhaps should be about consumables costs, as opposed to potential retail profits.

That one, two or three cents extra per print – even though it’s arguably a superior print – has had a much bigger impact than it should on investment decisions.

While K-Mart and Ted’s Cameras in Australia opted for the HP system (which will be phased out over the next couple of years) and NZ group Warehouse Stationery earlier this year disengaged from HP and opted for around 60 Fujifilm DL600 inkjet labs (manufactured by Epson), most retailers have just kept their old or refurbished wet labs ticking over.

Yet there are now three active players in the market: Noritsu (Noritsu Australia, IPS) Epson (Epson, Photo Direct, Kayell) and Fujifilm, and dry labs are into their third generation of technology.

‘- Eleven cents is the list price,’ confirmed Photo Direct’s Steuart Meers. ‘After that, it comes down to how good your negotiating skills are. It will be of no surprise to anyone that not all retailers are on the same rates!’

Given the oft-quoted truism that inkjet ink is more expensive than its own weight in gold, it’s surprising to see that in the costings above, it’s just half the cost of paper.

‘It will vary from supplier to supplier,’ said Mr Meers. ‘The Epson print price is about the same. The ratio between ink and paper may change.

‘If I was a manufacturer I’d probably skew it towards the ink rather than the paper, as it’s much harder to substitute than the other way around.

Retailers seeking to reduce their consumables bill by sourcing third party inks or papers may find the exercise costs more than it saves in the long-run.

‘Ink is very, very difficult. It’s not like Cartridge World where you can just bring an old cartridge in and get it topped up or whatever. The ink is manufactured specifically for the printhead,’ explained Mr Meers.

‘It’s technically easier to put someone else’s paper in the printer, but the reality is the printer manufacturers have spent a lot of money optimising the right paper with the right ink to get the right colour gamut, etc.

‘If you go to a substitute paper you might save one cent per print. This could potentially prejudice your colour output, but more importantly there’s an issue with inkjet printers of paper fibre floating around in the machine. The ink droplets being put down measure in microns. If you pick up a tiny piece of fibre somewhere then you are going to start wasting paper very quickly.

‘When they cut paper from a master roll it depends on how well that’s done, whether they vacuum away all the dust, that sort of thing. So you can save a penny but it might end up costing you a heap. You are buying into more trouble than what it’s worth.’

‘Are consumables more expensive than 11 cents a print for silver halide? I think they are. I think they are more in the 12 – 15 cent range depending on who you are buying them from.

‘Just like the issue of ink coverage, I don’t think anyone has nailed down the [silver halide] chemical cost either. Then there’s the long-life consumables like chemical filters and splicing tapes and back-marker ribbons.

‘And silver halide paper prices have gone up a from Fujifilm and even APS I think. So I don’t know if there really is a massive difference any more. Don’t forget some of the box movers are asking those low prices using dry.’

Mr Meers argues that obsessing about the cost of a 6×4 is futile. Photo specialists need to lift their vision above the irretrievably commoditised 6×4 print.

‘Independent retailers have to say to themselves, well, I’m not going to do 6x4s at a loss  – but accept they are not going to make any money out of it.

‘So let’s call your costs 11 cents. My strategy would be to ask 15 cents or maybe 17 cents and that’s it.’ – A kind of ‘set and forget’ approach where the 6×4 is given the weighting in the marketing mix its low profitability deserves.

He sees the 6×4 having shifted to the mass market permanently, with the consequence that the minilab machine will play a smaller role in the contemporary photo store, with the wide-format printer and finishing options really bringing home the bacon.

‘I don’t think you can get away without having a minilab, whether it’s wet or dry. To use a “Robbo-ism”, it’s like a service station selling petrol – you’ve got to do it to otherwise the people won’t come through the door.

‘But the other prices I supplied give you a perspective. Though smaller enlargements are also being catered for by mass merchants, it’s really when you get up into that wide-format range and a wide range of alternative media that a profitable market opens up.’ 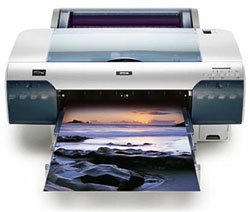 ‘You can put in a 24-, 36- or 44-inch machine and make that your real focus of the business while your minilab is your “have to have”.

‘It’s hard to engage with someone around a stack of 6x4s. It’s much easier to engage with them if they have gone to the trouble of getting a 16×20 canvas done and put a frame around it and are paying you a decent price.’

‘It’s all about retail – you’ve got to give the customer a good retail experience.’

Here are some other examples of cost-breakdowns generously provided by Photo Direct: :

But, he says, it’s not just a matter of making the print, rolling it up in a tube and handing it over.

‘It’s actually about getting the sizzle going as well. I would rather put my emotional energy into making $100 a job than a couple of cents.’ So it’s worth presenting the finished product ‘with a bow around it’ and going the extra mile in terms of putting a floating frame around a canvas, offering a range of mounting or framing options and those sorts of added value extras, as the profit margin allows for it.

Mr Meers addressed the pros and cons of dry labs. Energy costs are a clear advantage: ‘If you look at wet labs there are three sets of chemistry and probably six or eight tanks – all with 300-watt heaters in them. And then a dryer with a 5- or 600-watt heater in it and then fans and stuff – so they do gobble through a bit of electricity and so they needed three-phase power to make it all work.’

He noted there’s another potential cost: shopping centres can demand installation of extra air-conditioning at a cost of many thousands of dollars to counter the heat output of a wet lab.

Maintenance is another clear saving: ‘Wet machines have chemicals and racks and things which are moving. By their nature they need more maintenance by you the owner or someone paid to come in and do it. The dry labs still have a maintenance cycle and still need a technician to visit but it’s not as expensive over the life of the machine.’

He said maintenance visits for a inkjet lab were driven by volume, but were around six  months on average.

Then there is the environmental costs: The dry lab doesn’t need waste disposal. You don’t have to go get a waste permit or pay to have someone to take your used chemistry away.

There is a limited choice of paper stocks, but that’s more by way of the mass-production nature of a minilab and applies to a certain extent to wet labs as well.

‘Minilabs are fairly specialised beasts – if we call a minilab a thing which is going to handle up to 8- or 12-inch paper. Its real purpose is to do single-sided prints at volume. So to get reasonable volume, you don’t want to have 100 different papers going through it.

‘What you can do if you want to get into very specialised paper is do it on a wide format machine.

‘You’ve got all those other media we are starting to sell like metallic paper and self-adhesive vinyl that goes through the wide formats. You can do signage, you can do point-of-sale material.

‘If you are put your energy into all that kind of stuff you can expect reasonable money for it. Tony Borg down in Point Cook, for instance, is doing all his shopping centre’s point of sale.’

Volume is not the strong suite of current inkjet technology. A recent Fujifilm US webinar on dry labs quoted 800 prints per day as a ‘sweet spot’ for installation of a Fujifilm inkjet lab. Mr Meers questioned the sweetness of an 800x 6×4 prints throughput.

‘Is the consumer going to pay 50 cents a print? Even then, you are only making a couple of hundred bucks a day.

‘There is a lot less stress, and lot better bottom line and a lot nicer engagement with the customer because you can spend more time with someone placing a $200 order for a canvas or something.

‘We need to change the way stores present to the consumer. A one-hour photo sign doesn’t mean anything to probably 50 percent of the market any more. There needs to be some better catchphrases out there.

‘I’ve seen some stores – nothing in Australia to date but a few internationally – doing a very good job of turning themselves into sellers of wall art, using their own images or the customer’s.

He said it’s not a matter of $100K investments, but a change in the ‘go-to-market’ strategy.

He suggested that retailers go out and find some some commercial work, perhaps doing POS for a few neighbouring shops.

‘In fact we’ve found with a few customers if they start doing their own POS work for their store, suddenly they get it and it clicks in their mind and then they are more easily able to talk to other people about the opportunities available – from A0 posters to 8×10 or whatever, folded brochures, some self-adhesive signage for the front window….’

He added that Photo Direct was searching for products which can be finished in-store without elaborate tools ‘to hand the product back to a customers at a higher value’ – such as mounting boards which can be used to mount prints in-store as opposed to say investing $10,000 in a new laminator.

NEXT WEEK: The rise of the ‘Print Service Providor’ (aka commercial printers) as a competing channel.