(June 18: NOTE READERS’ DISCUSSION AT END OF STORY.)
Leading Australian industry figures will be attending the annual IPI Member Retreat and Supplying Partner Trade Show in the US next week in unprecedented numbers, including Camera House executives and members, along with other photo specialty retailers and pro lab owners. 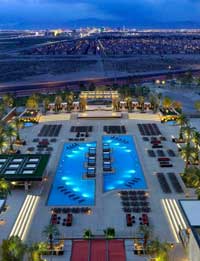 The event – which long-time IPI member (and conference-goer extraordinaire) Phil Gresham, Fotofast, characterises as the best of the annual photo retailing conferences around the world – will be held at The M Resort, Las Vegas, June 10 – 14 (pictured right).

‘The Conference is a massive event, and arguably the best and most relevant educational event that photo specialty retailers could attend to improve their businesses over the next 12 months,’ said Stuart Holmes, managing director of Independent Photo (IPS), the A/NZ partner of the IPI marketing group.

‘Both Camera House and Kodak Australia (in conjunction with the Leading Edge Group) have given strong in principle agreement to becoming International members of the IPI Marketing Group for their members, which total over 200 storefronts.

Kodak Australia will be represented by Independent Photo (a ‘full-service’ Kodak distributor in addition to its IPI affiliation) who will be sending its executive team of Rob Voysey, Stuart Holmes and Bruno Polito.

Mr Holmes said that there were now 25 IPI members in Australia and New Zealand, up from two or three a year ago.

‘Now we’ve reached critical mass it allows us to work on a Southern Hemisphere re-redevelopment of the program,’ Mr Holmes told Photo Counter at The Digital Show in Melbourne.

This involves putting together a schedule of events and promotions – Mothers’ Day, Fathers’ Day ,etc, which fit with the local calendar and are culturally more suitable than marketing promotions and collateral created for the American market.

‘There’s no exclusivity involved in IPI membership, except it’s exclusive to photo specialists, and if we don’t support indepdendents and arrest the tide of commoditisation of our market, then its all to our peril,’ said Mr Holmes.

Planned events at the IPI retreat – its 30th anniversary event –  include:
– release of an expanded and enhanced IPI Marketing Solutions Program;
– educational sessions on social media, conducting an extreme business makeover, home and office decor, B2B opportunities, and many others;
– member-to-member user group ‘How to Demos’;
– Supplying Partner-to-member user group ‘How To Demos’;
– networking opportunities.

‘Next week’s celebration is a huge milestone for IPI members and IPI,’ said Brent Bowyer, executive director at IPI. ‘Our continued evolution and growth speaks volumes about the determination and perseverance of IPI members, the selfless volunteer nature of the IPI board of directors, and the dedication of the IPI staff.

‘With a trend line of innovation, IPI has remained relevant to its members and for 30 years provided a beacon for service specialty retailers not only in the United States, but today around the globe.’