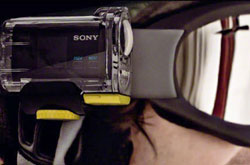 Sony Australia was involved in the development of the new camera.

‘Sony Australia is extremely proud to be the driving force behind the new Action Cam. We worked closely with Sony Corporation to design a technology-packed point-of-view action camera that’s simple to use and features high quality output and Wi-Fi capability in a durable package,’ said Di Shepherd, marketing manager, Digital Imaging, Sony Australia. ‘And with various mount options, the Action Cam line-up is so versatile that it will now be sold in New Zealand, the US, Canada, Japan and France.’

The Action Cam ships with a ruggedised, waterproof housing and a universal tripod mount. Within the housing, the camera is waterproof down to 60 metres and also has dirt and dust resistant seals.

Built-in Wi-Fi allows users to instantly share their content to a smartphone. Additionally, Wi-Fi-enabled mobile phones and tablets running the free PlayMemories Mobile application can pull optimised movies and photos from the Action Cam without requiring a special cable.

An app is also available which enables users to turn their smartphone into a viewfinder. 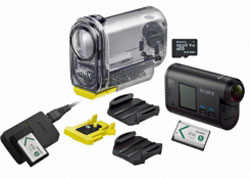 There are a range of video modes including 4x slow mode in 720p HD. While the Action Cam boasts a 16-megapixel sensor, maximum stills resolution is just two megapixels.

An ultra-wide angle Carl Zeiss Tessar lens captures a 170-degree wide field of view. Sony says that ‘no other mountable camera combines such advanced image stabilisation and optics with a rugged exterior and convenient Wi-Fi connectivity.’

For hands-free shooting, The Action Cam mounts to flat and curved surfaces with the included adhesive mounts.

The Action Cam with Wi-Fi will be available from October 1, with an RRP of $399.