Sony Australia has announced the Alpha 57 (SLT-A57), a new 16-megapixel ‘DSLR’ designed along the lines of the Alpha 77 and 65, with Translucent Mirror Technology, a high resolution electronic viewfinder, and 12 frames per second shooting. 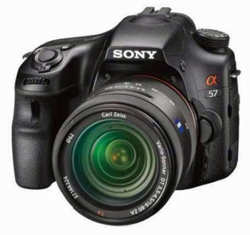 The Translucent Mirror Technology has been improved on this model with ‘Continuous Advance Priority AE mode’, which gives a 1.4x magnification boost by cropping to a close-up in the centre of the image area. This enables continuous shooting at the stated 12fps.

This shooting mode also features sophisticated tracking technology that helps keep subjects in focus whether they are at rest or moving about.

Auto Portrait Framing, ‘another world first from Sony’ helps users compose scenes by offering alternative compositions to the original scene. It’s based on the rule of thirds, automatically identifying the subject’s face and trimming parts of the scene to create a well-balanced composition. In addition, there is a digital level gauge and framing grid.

The A57 also has a Clear Image Zoom feature to allow those who haven’t yet purchased a telephoto lenses to explore zoom photography via a sophisticated digital zoom function which ‘allows users to achieve up to 2.0x zoom on a standard single focus lens with an image quality that remains almost indistinguishable from an optical zoom lens.’

The Tru-Finder electronic viewfinder on the A57 has an upgraded to 1440k dot resolution, and delivers 100 percent field of view. Sony says that even in low light situations the viewfinder rivals quality optical viewfinders.

Other features include Sony’s in-camera stabilisation system and a 3-inch adjustable LCD screen.

The A57 will be available in Australia at all Sony Centre stores, Alpha Specialist Dealers and authorised outlets from April, ‘from $899’ (body only).

COMMENT: With a US price of $699 and an Australian price  ex-GST of $818, Sony has really given the local stores something to work with here. This size of differential might be close to about as good as can be expected for the leading brands. The anomaly of GST-free offshore sales starts to come into sharper focus.