Cashed up Sony-toting pros and enthusiasts to whom money is no object might be interested in adding the $17,000, 500mm (equivalent to 750mm with APS-C sensor) Sony SAL500F40G super-telephoto lens to their arsenal. 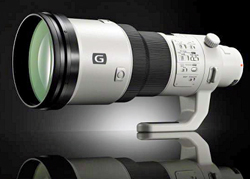 (The rest of us might prefer to buy a new car or a first class round-the-world trip!)

The SAL500F40G is the longest fixed focal length G Lens from Sony. It has a maximum aperture of f4, enabling the use of relatively fast shutter speeds and shooting in indifferent lighting.

The focusing ring and front/rear joints are protected by interlocking seals that prevent the build up of dust and moisture, even when shooting outdoors in rain or arid desert conditions. Sony says the weather-resistant design makes the Sony 500mm a good match for the new Alpha 77 DSLR, as it has similar ruggedised design.

The SAL500F40G is compatible with the SteadyShot INSIDE image stabilisation. Depending on shooting conditions, camera model and settings, camera-shake blur delivers up to 4.5 stops (max.) in shutter speed.

Four focus hold buttons are spaced around the lens barrel for easy operation in any position. They are complemented by a two-way DMF (Direct Manual Focus) mode button and focus range switch for positive, fumble-free operation when you’re shooting under pressure.

Built to order, the SAL500F40G super-telephoto lens from Sony will be available through selected Sony stores and Sony Alpha specialist dealers from April, priced at $16,999.