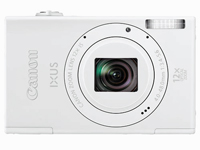 The announcements are  somewhat in advance of Australian availability, co-inciding with the CP+ exhibition in Yokohama this week.

Users can now share their images and movies via email and by uploading to some social media sites (including Facebook and YouTube) via web-enabled Wi-Fi devices, smartphones and tablets including iPhone 4/4S, iPad/iPad2 and iPod Touch 4th generation with iOS 4.3 or higher.

Both models also feature Intelligent IS and Face ID. They will be available in Australia in April.

The same sensor is used in the unusually-shaped new PowerShot D20, (pictured right), which features a 5x zoom lens from 28mm wide-angle. The D20 is waterproof to 10 metres, can withstand drops of 1.5 metres and temperatures as low as -10 degrees Celsius. It also features integrated GPS technology.

Also announced are the 16-megapixel PowerShot A4000 IS with 8x zoom, and the PowerShot A2400 IS and PowerShot A2300, both with 5x zoom. The new cameras feature an improved ‘intelligent’ auto mode with 58 scene recognition presets in the SX260 HS and 32 in the A-series models.

The new SX and A-series cameras will be available from March, 2012. with the D20 scheduled for release in June.