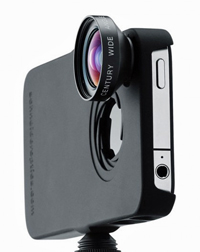 The product is built around an aluminium case, to which separate fisheye and wide-angle lenses can be attached. The case also attaches to a tripod.

Lens-housings are made from anodized aluminium to prevent wear when twisting lenses in and out of the case. Lenses can be fitted and removed quickly and easily, courtesy of bayonet-style fitting.

The lenses have an anti-reflection coating and are painted at the edges to reduce lens flare.

The wide angle lens affords a 35 percent wider field of view ‘with minimal distortion and edge-to-edge sharpness’ while the fisheye lens increases the field of view to 165 degrees.

The three-in-one tripod mount adaptor is also a lens case as well as a handle, which Schneider Optics says helps in taking steadier shots.

The iPro has a US$199 price point and it appears there is no current A/NZ distributor. Schneider has also flagged a compatible telephoto lens to be released in April for around $100.

The Schneider iPro joins a range of accessory lenses for iPhones (although none of the others are from such a venerable optics manufacturer as Schneider).

There’s even an adaptor available for marrying Nikon and Canon SLR lenses to an iPhone!