Samsung Electronics has announced what it is calling a new product category with  the launch of the Samsung Galaxy camera, which marries digital compact camera performance to tablet-like wireless network connectivity, ‘creating a brand new type of device’. 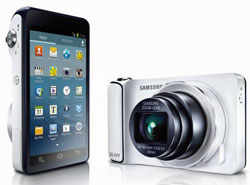 While some reports are referring to the Galaxy as a smartphone/camera hybrid, the one thing it doesn’t do is make phone calls.

The Samsung Galaxy is equiped with a CMOS 16-megapixel 1/2.3-inch sensor – the same physical size found in the majority of digital compacts and much larger than the general run of camphone sensors in both size and resolution. ISO is from 100 through to 3200. Optical zoom is 21x, from 23-481mm, with optical image stabilisation.

A Voice Control option allows the user to control a number of functions such as ‘Zoom in’ and ‘Shoot’ through voice.

‘As we increasingly articulate our experiences through pictures and videos the Galaxy camera has been created to lead the way in this new era of visual communication, said JK Shin, president of IT & Mobile Communications Division at Samsung Electronics.

The Galaxy’s 21x optical zoom can be controlled by either button or touchscreen.

It includes a set of 35 photo editing features through the ‘Photo Wizard’, allowing users to make edits on the go. The new features take advantage of the ultrafast quad-core processor and HD Super Clear LCD, giving access to a feature like Auto Face Calibration so edits can be made in precise detail and with ease. The ‘Movie Wizard’ also allows users to create and edit expert quality videos easily from the touch screen.

The Galaxy also features ‘Smart Content Manager’, a tool which creates folders, tags faces, and even suggests which pictures to delete when they don’t come out as desired.

The internet capabilities of the Galaxy are equal to those of the latest smartphone so that users can get even more enjoyment out of their device. In addition to pre-installed applications from Samsung, users can browse the web and enjoy any applications from Google Play or Samsung Apps stores.

The camera’s ‘Auto Cloud Backup’ feature will save photos on a Samsung server the instant they are taken. The Galaxy also allows users to share photos at the same time as they shoot them with ‘Share Shot.’ As well as sharing to social networks and cloud services, users can also connect to a range of Galaxy devices including the SIII and Note II for automatic sharing of pictures.

The new device enables connection to 3G or 4G, allowing photo sharing and browsing anywhere. Connectivity is supported by a quad-core processor that enables fast web-browsing and multi-tasking, as well as high speed image processing.

NOTE: At CES 2012, Polaroid announced a SC1630 ‘smart camera’ that also features a 16-meg sensor and runs on Android.

COMMENT: It’s understandable that this interesting new device comes from the IT & Mobile Communications Division at Samsung, rather than Digital Imaging, but could mean trouble for camera retailers if that business unit rely solely on the IT and mobile channels to bring it to market. Corporate business units sometimes operate as silos, and don’t play well together, and this ‘brand new type of device’ could be cause for an almighty demarcation dispute if not managed well.

Interesting to note that Samsung didn’t build a mobile phone into the Galaxy and take the trifecta. Technical considerations or possibly fearful of cannibalising sales from Galaxy III? This must surely be the next step. Apple? Google? A camera company? Anyone?