Retailers to get cashed up consumers for Christmas? 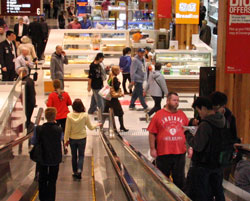 ‘Interest rates have been slashed, wages growth is solid, house prices are stabilising, and consumer confidence has picked up,’ the report said.

The improvement remains below the trend rate of retail growth in the days before the global financial crisis.

Around 70 per cent of the 52 senior retail executives in the Deloitte survey say they expect higher sales this Christmas from a year ago, while 13 per cent believe it will be worse than 2011.

‘For retailers, it won’t be the Christmas of their dreams, but it may provide them with a vital ingredient which has been missing over the previous two years – decent cashflow.’

– However, that cash might flow right back out of retailers bank accounts by January, with a third of retailers who are expecting to discount expecting to do so earlier this month –  possibly prompting those who didn’t intend to do so to follow suit.

(This tendency towards discounting early and discounting often may prove to be the lasting legacy of Australia retailing’s current tendency to slash prices as a solution to poor retail turnover.)

Retail sales over the first half of 2012 have already increased by 2.8 percent – a big improvement on the negligible annual rate of growth seen over the previous two years.

Retail trade growth over the year to December 2012 is expected to come in at 3.7 percent  in real (inflation adjusted) terms, and 4.4 percent in nominal terms – a sound outcome by recent standards.

While it may be a brighter Christmas, it’s likely to be back to the reality of a hard slog for retailers in 2013, the report noted. The labour market is weak and there is no immediate sign of improvement (though an expected decline in the $A may help over time). Interest rates are low and possibly heading lower while house prices are showing signs of life, ‘so there are some supports, but perhaps not enough to maintain short-term momentum.’

‘Income growth is modest and these days consumers are taking a more measured approach to borrowing and spending than they have in the past, the report stated.

Access Economics furrther predicted that retail sales growth may then moderate to 2.7 percent in 2013/14 with modest labour income growth, before improving to 3.6 percent in 2014-15 as broader economic conditions and housing activity improve.

That disparity in performance is likely to narrow going into 2013 as lower interest rates support more businesses in the south east, while mining investment levels start to approach a plateau.

‘Income growth is modest and these days consumers are taking a more measured approach to borrowing and spending than they have in the past,’ he said.