The ARA has backed up its call for time-and-a-half rather than double time for Sunday work with a recent piece of research from Monash University which indicates that rate is the optimal incentive for employees. 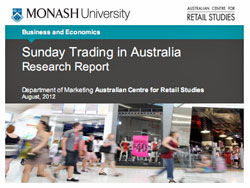 The Monash University (Australian Centre for Retail Studies) report, ‘Sunday Trading in Australia‘, covered the views of almost 600 employees in the retail industry as well as input from employers.

Interestingly, of those employees surveyed, 60 percent are already at time-and-a-half for Sunday work, with only 11 percent receiving double time and another 10 percent working at standard rates.

Australian retailing is currently struggling to meet a perceived consumer demand to ‘shop around the clock’ but even when restrictions are lifted to allow extra trading hours, the costs often far outweigh the benefits of staying open, according to the ARA.

‘The research also shows people rely on the retail industry to be able to work during hours that suit them. Reducing penalty rates would both increase and guarantee these hours.

Key findings of the Sunday Trading in Australia Research Report were:
1. Retail is challenged: By a range of consumer and marketplace trends including online retail, increased consumer desire for 24/7 convenience, consumer knowledge power and increased savings levels.
2. Sunday trade is generally strong: Accounting for 10 to 25 percent of weekly trade. However, this figure varies significantly depending on a range of factors such as store location and hours opened on Sunday.
3. . …But is not always profitable: Due to higher labour costs, the increase in trade for Sunday is not always sufficient to offset wage increases.
4. Sunday employment: While increased pay is the key benefit of working a Sunday, flexibility is also an important driver for Sunday work. Interestingly, a third of retail employees would not work on a Sunday, despite a time penalty rate. (Which seems to contradict the assertion from some quarters that, in these secular, 24/7 times, there is no real difference between Sunday and any other day of the week. KS)
5. Some employees not able to work: higher pay rates generally mean that more qualified staff tend not to be rostered to work on Sunday to keep labour costs ‘manageable’, resulting in less available hours of choice for such employees.
6. While others are forced to: with many stores forced to open Sunday (ie, property leasing agreements), store owners are often forced to work themselves on Sunday to avoid penalty rates which would otherwise make Sunday trading non-profitable.
7. Pay does not increase employee satisfaction: time-and-a-half rates significantly increase retail employee satisfaction, with a rate of double-time only marginally increasing satisfaction levels. This means that a Sunday penalty rate of time-and-a-half has the largest impact on employee satisfaction.
8. Increasing penalty rates: presents detrimental effects to retail business and industry performance at large. Penalty increases will essentially result in a neutral gain for retailers, whereby staff receive higher pay for working on Sunday, but less available hours. Customers will also be negatively impacted in that there will be less available staff to service Sunday trade.
– Executive Summary, Sunday Trading in Australia Report. ACRS, Monash University

‘Extensive research done by the ARA clearly shows employees are looking for flexible hours, which a modern shopping economy can provide if it is able to break even after factoring in the costs associated with employing people, in particular on Sundays,’ said Mr Zimmerman.

‘The ARA’s engagement with both retailers and their employees enabled its submission to propose the right balance between the need for employees to be remunerated fairly for working on weekends and the ability of retailers to open during these hours and provide those jobs.

In its March submission to FWA on the Modern Award Review 2012, ARA called for the General Retail Industry Award (GRIA) Review to consider modern retail conditions, consumer demand for 24/ 7 shopping and promote employment in a sector responsible for 1.2 million jobs.

‘Let it be clear, the ARA’s March submission to FWA isn’t to abolish penalty rates but to reduce them to a more competitive level,’ said Mr Zimmerman.