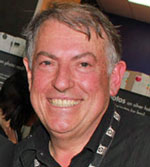 In 2011 PMA saw its greatest year of change (both in Australia and internationally), probably since inception.

The need for stability and an understanding as to what may be required in our industry over the next year, requires a ‘steady as she goes’ policy. This stability will be a real asset, as Jim Esp, with the guidance of a reinvigorated board, looks to re-engineer PMA for the future. It’s going to be an exciting time!

Congratulations to Phil Gresham (pictured above right) on being voted in as Australian national chairperson. Phil has subsequently agreed to stand, and I know he will be of great help to your association in the coming year.

There was also strong support for John Ralph, which is well deserved, following his efforts over recent years.

Each of the current PMA state chairpersons (as listed below) have agreed to stand again for 2012:

NSW TVP: John Ralph
– John did a great job in 2011 and was of great help during the annual conference in Sydney.
Vic Chairperson: Jeff Crowley
– Jeff has added a different approach to membership and functions such as the Xmas party.
Qld TVP: Andrew Mason
– Andrew has continued the impetus generated by Phil and has headed a committee that has organised successful Xmas functions.
SA Chairman: Paul Atkins
– Paul has attempted to organise PMA functions in SA while being limited by a small membership base.
WA Chairman: Murray Gibbs
– Murray arranged a trade show and a couple of successful social functions that were well supported.
Tas Chairman: Tim Jones
– Tim has managed to arrange a number of well attended PMA social events and is seen as the ‘face’ of PMA in Tassie.

Finally, thanks again to Richard Robertson for agreeing to continue as national chairperson until January.

I am sure you would join me in congratulating (and thanking) the above group for agreeing to stand.