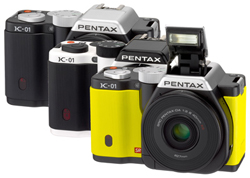 Beyond its features and specifications, the Pentax K-01 distinguishes itself in the Australian market in being priced at $849 (including GST), while the US price for the same configuration is US$900.

It shares many features with the Pentax K-5 and uses the same 16.28 megapixel sensor. It is also directly compatible with all K-mount lenses (25 million of ’em!) and accessories designed for Pentax DSLRs. Released to accompany the interesting new camera is a Pentax DA f2.8 40mm pancake lens which is just 0.36 inch (9.2 mm) thick.

Style is a major selling point for the K-01, with the camera having being designed by ‘the most acclaimed and influential designer of his generation’ – Sydney expatriate Marc Newsom.

The aluminium alloy body comes in black, white or yellow, and features neat, straight lines and a rubberised grip. High-quality aluminium alloy buttons are optimised for functionality and visual attractiveness.

The new K-01 has replaced an optical viewfinder with a 3-inch, 921,000 dot LCD display with a 170 degree viewing angle. There is no electronic viewfinder. There is, however, a top-mounted hotshoe, underneath which is housed a pop-up flash.

The camera includes built-in sensor-shift stabilisation and supports ISO settings up to ISO 25,600 with noise reduction at all sensitivity levels. The PRIME M processor supports Full HD video recording at 30, 25 or 24 fps using H.264 compression. Soundtracks are recorded in stereo and a dedicated movie button is provided, along with a jack for an external microphone.

Users can set the camera to embed copyright information in images. Raw files can be ‘developed’ into JPEGs in camera and correction for distortion and lateral chromatic aberration is also available. The K-01 also supports a high degree of button and dial customisation and provides a ‘peaking indicator’ to help users to obtain accurate focus.

It is capable of 6fps burst shooting. There’s a P/A/S/M settings and exposure dial on the top which can be used to activate the in-camera HDR feature, access numerous scene modes or turn the flash off. Its Li-ion battery promises 540 images between charges, there’s SD, SDHC, SDXC media card support and USB 2.0 and HDMI ports.

The K-01 will become available in March. In the US, the body-only recommended price is US$749.95, and with the 40mm pancake lens, US$899.95. In Australia, the K-01 with the 40mm lens is a remarkable $849 – remarkable in that the local pricing is line-ball with the US price. As we’ve asked before at Photo Counter – if Pentax and its (third party, not company-owned subsidiary) supplier can do this, why not the other Australian camera distributors?

Marc Newsom – who he?

From his website: ‘Marc Newson is the most acclaimed and influential designer of his generation. He has worked across a wide range of disciplines, creating everything from furniture and household objects, to bicycles and cars, private and commercial aircraft, yachts, various architectural commissions, and signature sculptural pieces for clients across the globe. [And now cameras!]

Marc Newson was included in Time magazine’s 100 Most Influential People in the World and has received numerous awards and distinctions… most recently was awarded a CBE (Commander of the Order of the British Empire).

His work is present in many major museum collections, including the MoMA in New York, London’s Design Museum and V&A, the Centre Georges Pompidou and the Vitra Design Museum. Having set numerous records at auction, Newson’s work now accounts for almost 25 percent of the total contemporary design market.

Have a look at this in-house interview with Newson, where he talks about designing the new camera.