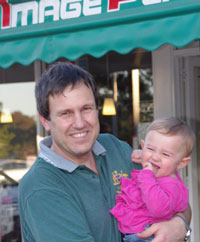 One Bay Park Photos customer had her passport photos rejected twice by the local post office, only to have them accepted by the Government passport office on a visit to nearby regional city, Newcastle.

Earlier, when she showed the compliance certificate to the post office staff she was told that it wasn’t valid, which John Rule, Brands Australia general manager – and the photo industry’s acknowledged passport photo expert –  says is incorrect, along with the initial rejection of the passport pics.

The passport photo as requested by the local post office was so far out of compliance when scanned into ID Station Biometrics Checking software, said Chris Harris, that the ID Station software, doing what it was designed to do, would not even allow the picture to be printed – he had to move the file over to a minilab!

‘There’s nothing wrong with them,’ said Mr Rule. ‘The post office may not know what the compliance certificates are. They maynot be aware of the technology at all.’

There were perhaps 20,000 Australia Post and Licensed Post Office personnel involved in assessing passport photos: ‘How do you control 20,000 people and their perceptions and opinions over compliance?’ he asked.

Though the increase in rejections at Port Macquarie maybe an issue of commercial gain, it could just as easily be an innocent but incorrect judgement by a staff member or store manager.

‘What we do is have the photos sent to us and if the photo is compliant and they have been incorrectly rejected we will forward them to DFAT with a formal request that they investigate.’

He said that he had taken this course rarely, but DFAT had always carried through with an investigation. There were a range of disincentives for post offices to incorrectly reject, or indeed approve, passport photos in the shape of penalties from DFAT, added scrutiny from Australia Post management, the danger of being possibly being charged with fraud, and simply getting into trouble with the boss.

Software was being rolled out in some post offices to check and confirm the approval process.

‘It hasn’t happened that often over the years but there’s no question that despite all the checks and balances, things get rejected for the wrong or mistaken reasons. There are 20,000 staff making judgements. That’s why software is essential.’

While happy to advise ID Station/Polaroid customers and other photo specialists on difficulties with passport photo rejections, Mr Rule suggested first attempting to deal with the matter locally.

‘Before you go down the road of making a formal complaint it’s always a good idea to first raise the issue face to face’ he said, as the DFAT investigation will ‘get their backs up’ and having  a local mutually supportive and respected relationship works best for all parties longer term interests.

Mr Rule added that Brands Australia is a member of the Biometrics Institute and the ID Station helps meet stringent new ICAO requirements for passport photos. Biometrics software is a still a relatively new technology and not yet widely understood, but its implementation will in time  help to reduce human error perception with passport photos, he said.