Online – just get over it

John Swainston, managing director of photo accessory specialist Maxwell International, opened his segment of the PMA Digital Conference session, ‘Retail Global Trends’ by noting that, although Australia is rated as the best performing economy in the OECD, according to recent findings by Boston Consulting Group and The Melbourne Institute, confidence here is among the lowest in the OECD 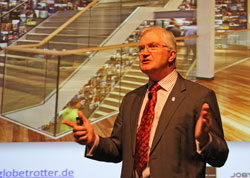 The obvious answer is that none of us trust our politicians, he said, but ‘disruptive change’ in technology was also playing a part.

‘Retail in…the bricks and mortar business is flat, and the only bit of growth in retail on the national figures is the online business,’ he said. ‘So if you are not doing omni-channel or dual channel at least, you are not participating in growth.’

He predicted the pressure from the online world, which in part has led to the recent demise of Retravision Southern, WOW and Game in Australia, would only get more intense. He said Australian retailers were not alone, with their US counterparts confronting giants likes of Amazon and Google.

He warned local retailers they should anticipate Amazon as a direct player in the local market before too long.

‘If you think it’s tough now, wait until you’re competing with this group [Amazon]. They’ve opened in eight out of the top 12 countries. Australia is number 11, so you will expect to see Amazon in this market and it will disrupt the market all over again.’

Along with changes in the way retailing was being conducted were rapid technological changes, which have seen cameras move in around 10 years from a modest one- or two-megapixels to forthcoming 5K (5120×2700 pixels) DSLR cameras, capable of broadcast quality video, among other things.

‘We have an ageing population which is having technology thrown at it, and some of us take a little longer to adapt,’ he observed.

A specific example of the rapidity of change is the almost-overnight disappearance of the Flip-type camera.

‘We’ve seen something like Flip completely taken out of business, with a $600 million write-off, by the iPhone.’

You can’t digitise everything!

Harking back to Amazon, he noted that while the book business has been decimated by the Amazon model and eBooks, it can’t be extrapolated that this will be the fate of all retail sectors.

In the book business, it’s the content which matters, so we are down to $9.95 for an eBook compared to $39.95 for a conventionally distributed paper book.

‘However you [photo retailers] have an advantage over the Amazon model for books because you are selling something where someone is consuming the product – consuming a camera or camera bag. You can’t digitise that.’

He added that some of the value of cameras, such as firmware and software upgrades, can be delivered digitally, and that might change the camera business in the future.

He said that, books aside, Amazon generally sells about 30 percent under specialty retail price points. It does this by taking a much smaller margin and having a sharp focus on inventory control.

‘They are manic about inventory control,’ said Mr Swainston. ‘They have 35 days less cash tied up, and if you are trading with most people on 30 days from statement, that means you have negative investment in the business.

‘If you are running on the other side and you owe money, you have to fund your business. So one rule for retailers is, manage your inventory to a level of manic association, because that enables you to manage with some flexibility.

Real estate issues in retail was another area of change. Mr Swainston gave Oxford St in Sydney as an example. Once a popular fashion precinct, it is now characterised by For Lease signs.

‘So the world is changing. In physical retail, a lot of people want the security of going into a single venue for all their stores.’

– Consequently, malls are popular and some shopping strips less so.

Technology has also taken the guesswork out of shopping when it comes to prices. Recognising this, UK grocery chain Sainsbury’s has introduced a price matching service: ‘When you check out, if your basket is at a higher price than the current competitive price you get a voucher for the price difference – the ultimate yield on “always low prices”.

‘If you take price away, it’s all about the retail experience.’

‘If their competitor doesn’t do that, you tend to go to Sainsbury’s because they have given you a price promise and the ability to check. Trust is the other element of retail so fundamental today.’

Other technological changes looming on the transactional front are proximity cards (smart credit cards which can be ‘read’ without inserting them into a reader device) software which recognises your mobile when you walk by and makes a retail offer, and QR codes.

He summarised his overview of the various forms of disruptive change impacting photo retailing by noting: ‘Online isn’t a threat – it’s the way it is. Just get over it.’

He said the disruptive technological change will continue, and in the area of supply chain costs it was important that suppliers and retailers work closer together to become more efficient.

‘If retailers and suppliers want to stay connected with each other, we will have to work much more closely together to mutually survive.’

The good news is that more people than ever are taking pictures. There is something like 400 billion photos in the world.

‘- That’s the good news. People are saving the images, but a large proportion of them are captured on camphones and that is accelerating.’

He said various estimates put the cameraphone’s proportion of picture-taking at up to two-thirds. Moreover, there are around four times as many smartphones than cameras being sold – 491 million in 2011 compared to 140 million cameras.

He said there were 6 billion pictures uploaded to Facebook each month (compared to 6 billion pictures total in Flickr, which was now a failed business model). Approximately 50 percent of the Australian and New Zealand population were Facebook members.

(By comparison, in the days of film, around 900 million photos were taken each year in Australia. KS)

– In fact, he said, there was a prediction this year from the huge international printing expo, DRUPA, that printing will not exist in 20 years, replaced by alternatives such as high resolution nanocrystal screens.

But for now, even though global printing levels were falling, the photo book was finally emerging as an alternative to prints. He cited the latest financial results from European giant wholesale photofinisher, CeWe Color.

‘Their business is all photo book today,’ said Mr Swainston. ‘The 6×4 print really isn’t a big thing for them. They have turned their business around and next year they will make as much money as in their peak year of 6×4 printing.’

Moving back to the local scene, Mr Swainston noteds that while sales in 2012/13 are falling, ‘there’s good news within that’.

‘CSCs [mirrorless interchangeables] are growing at 97 percent per year. DSLRs are at 23 percent and they will bounce back in the next few months. Point and shoot cameras above 10x zoom had 43 percent growth last year and the average selling price is going up.

‘Even tripods are growing at 16 percent with an increased average selling price,’ he added.

These are the current growth categories, and  with the price differential between Australian retailers and offshore online operators shrinking, there’s a great opportunity to ‘compete on a more level playing field.’

‘More people than ever are taking pictures. The business is sharing, learning and adding value, and there are growth segments out there in the business, and once we’ve got pricing right we can start competing quite well.’