Online a growing slice of the pie

Onlines sales growth outstripped total retail sales by a factor of four in the 12 months to June, according to to the latest Roy Morgan Research ‘State of the Nation Report’.

The report said online sales were up 14.2 percent to $22.8 billion in the 12 months to June 2012, compared to a growth rate of only 3.3 percent in total retail sales. Online sales now account for 9 percent of total sales volumes.

Around one third of the Australian population buys something online over an average four-week period and well over half (56.7 percent) have ever bought something online.

According to the study, online spending is heavily skewed to big spenders with only 11.7 percent of the population accounting for 43.4 percent of the total online sales volume in an average four-week period. 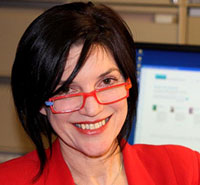 Chief executive officer, Roy Morgan Research, Michele Levine (pictured right), said the influence of the Internet and other digital touchpoints are dramatically influencing retailing, often in ways that are not immediately obvious.

‘With sales totalling $22.8b in 2012, online purchasing is radically transforming Australians’ shopping habits. eBay is now Australia’s No.1 shopping mall, with more visitors in an average four weeks than all Westfield shopping centres nationally,” said MsLevine.

She said almost half of Australians research online but still buy offline.

‘Online catalogues, reviews and price comparison websites can often predetermine the brand choice before the customer even enters the store.’

Based on the ‘Roy Morgan Technology Adoption Segments’, the group that is first to adopt any new technology (‘Technology Early Adopters’) makes up 17 percent of the population yet accounts for 30.7 percent of online sales. They also have the highest incidence of online shopping, with 56.3 percent having shopped online in an average four week period.

The study is based on analysis of the Roy Morgan Research Single Source Survey conducted with over 50,000 Australians.