Olympus Imaging Australia has announced the Tough TG-1, its ﬂagship Tough camera model and ‘the most rugged Olympus Tough camera to date’. 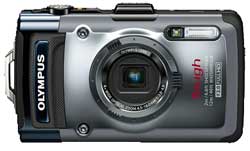 – But the TG-1 is not only tougher than two separate chapters of The Hells Angels, it’s bright too. And the RRP of $499 is not going to send customers off to some foreign website!

Equipped with a wide aperture f2 zoom lens, which Olympus says is ‘brightest in the class’ the TG-1 offers better performance in low-light conditions. It also has a faster-responding GPS system.

The f2 lens is a wide-angle 4x zoom ranging from 25-100mm (equivalent in the 35mm ﬁlm format), and the internal zooming optical system is designed to retain precise optical accuracy, even when the camera is dropped or knocked.

Using its new generation A-GPS system, the TG-1 enables users to pre-load satellite coordinates to speed up satellite-acquisition. Using this technology, the names of 700,000 landmarks from 195 countries are automatically displayed on screen and captured with each shot. The GPS Logger function also enables users to map their route via Google Earth while travelling with the camera.

A built-in electronic compass works with the GPS unit to provide direction, longitude and latitude information in the special ‘Active Gear’ display mode. Active Gear can be displayed on screen, even when the rest of the camera is switched off.

The camera has a 3-inch OLED screen (610K) and a built-in LED macro light.