In addition to the launch of the rather interesting OM1-like EM-5, Olympus Australia also announced three new digicams, the SZ-31MR, the SH-25MR and the TG-820.

The SZ-31MR is a new flagship model in the Traveller series and features a 24x wide angle zoom lens (25-600mm in 35mm format), 16 megapixel BSI-CMOS sensor, ‘multi-recording’ capability, touch-screen control and new Intelligent High Speed/High Sensitivity technology (iHS). Response times in the new camera have been improved, enabling high-frame rate burst shooting at up to 60fps for stills or 240fps for video. 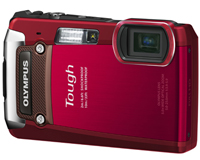 Release dates and pricing have not been supplied.