Following more than a year of speculation and plentiful leaks of product images and specifications, Nikon has finally (fully) lifted the veil on its D700 replacement, the D800. 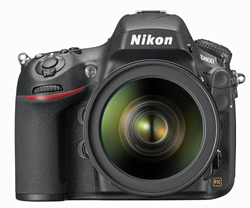 Positioned between the D300s (which along with the D700 is to be discontinued) and the recently-released D4, the 36.2-megapixel D800 will be offered as two models, one without the anti-aliasing filter in front of the sensor, to be known as the D800E. The filter in question suppresses moire by slightly blurring images, so the filter-free model, which is purported to be priced roughly 10 percent higher than the standard model, should provide better image clarity. It is likely to suit landscape and architectural photographers, whereas the standard model is targeted at wedding, studio and fashion photographers who need high resolution for large prints.

The D800’s sensor is believed to be manufactured by Sony and based on Exmor technology, which combines a wide dynamic range with low noise levels. It’s been speculated that performance on a pixel-by-pixel basis should be similar to the Sony NEX-7 (which sports a 24-megapixel APS-C sized sensor).

Coupled to the sensor is the latest EXPEED 3 image processor, which was introduced with the Nikon 1 V1 in September, 2011 and also powers the Nikon D4. As in the D4, the processor is optimised for DSLR cameras and underpins the camera’s video capabilities (which are virtually identical to those of the D4). The D800 also includes the built-in HDR function introduced with the D4.

Although the D800 boasts a new AF module, it is similarly specified to the D4 and autofocusing options include face detection and face tracking. Face detection and tracking have been improved to cover multiple faces and minimise tracking errors. Advanced Scene Recognition is also provided.

Live View shooting is available for both still and video capture and flicker detection can be switched on to prevent interference from pulsed light sources. As in previous models, a Virtual Horizon can be displayed on the monitor in Live View mode but the D800 adds the ability to see this displayed in the viewfinder as well.

The monitor on the D800 is the same 3.2-inch, 921K-dot screen as the D4 and a ‘gapless’ construction provides improved visibility and supports a wider colour space for image playback. The screen auto-adjusts to the ambient light level and features a new structure that decreases light loss in bright conditions.

Dual slots are provided, one for CompactFlash and the other for SD/SDHC/SDXC cards. Users can record two full cards of data, record the same data onto two cards for backup, record raw and JPEG simultaneously onto separate cards, or transfer data from one card to another.