Nikon has announced 10 new Coolpix digital compact cameras, adding two models each to its P-series and L-series, and six models to the S-series. 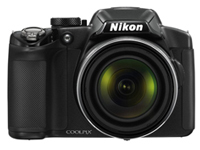 The new Coolpix P310 and P510 (pictured right) models feature built-in lens-shift VR stabilisation and provide an effective resolution of 16 megapixels via a backside illuminated CMOS sensor. The 921k-dot TFT LCD monitor has an anti-reflection coating to improve outdoor viewing. Both models come with P, A, S and M shooting modes and have a number of extra shooting and editing functions, including Coolpix Picture Control, which allows users to adjust the vividness of colours or degree of sharpening applied to images prior to shooting. Frequently used shooting menu items can easily be assigned to the new customisable function button.

Both cameras can record Full-HD movies (1920 x 1080 pixels) with stereo sound and allow VR stabilisation and optical zooming to be used during recordings. Movies recorded using the HS Movie function can be viewed in slow motion at half or one quarter of the normal playback speed.

The P310 will replace the P300 and offer the same f1.8 high refractive-index lens with 4.2x optical zoom lens that covers focal lengths equivalent to 24-100mm in 35mm format. High-speed continuous shooting of up to five images is available at approximately 7fps. Nine settings are offered in the Special Effects menu and five in-camera filter effects are also available.

The P510 replaces the P500 and comes with a 42x optical zoom lens covering a focal length range equivalent to 24-1000mm in 35mm format. Lens-shift vibration reduction (VR) provides camera shake compensation of up to four f-stops. Nikon’s new Target Finding AF function automatically predicts and selects the focus area and focus area size. The Scene Auto Selector mode has been improved to provide more precise and specific identification of scenes. Information acquired by GPS is recorded with the images and when View NX 2 is used, a map showing the shooting locations is displayed on the monitor. Data logging at specified intervals is also supported.

The new Coolpix S-series models include the S9300 and S9200, both of which sport 16 megapixel backside illuminated CMOS sensors and 18x optical zoom lenses. Both models can record Full HD video clips with stereo sound. The S9300 comes with a built-in GPS and electronic compass, which acquire and record position information automatically, enabling them to be viewed via the camera’s monitor.

The Coolpix S6300 also sports a 16 megapixel sensor plus a 10x optical zoom lens and includes Full HD movie recording. Other features include support for 3D Photography plus numerous special effects and filter effects. The 16-megapixel Coolpix S4300 and S3300 (pictured right) are slimmer than their predecessors despite improved zoom function and built-in VR. The S4300 includes touch-screen controls.

The Coolpix S30 is designed for family use and is able to withstand falls from heights of up to 80cm. It is also waterproof to a depth of three metres and dust resistant, and has large button controls for the shutter release, power on/off and movie recording. There are six filter effects and three special effects have been added to the Scene Mode Options. Up to two voice messages can be attached to a single image.

ADDENDUM: Local release dates and pricing have not been supplied. However, as  these cameras are slated for February release in the US, they can’t be far from Australian and NZ shores.