Canon Australia has announced upgrades to its imagePROGRAF range of wide-format inkjet printers. 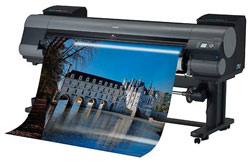 The new printers introduce colour management and calibration systems. ‘Calibration Link’ is a system that supports stable output from multiple devices, whether in different departments, different floors or different states. Together with the new Calibration Management Console (CCMC) software it enables users to calibrate one machine and then replicate the results to others. Optical technology from Canon’s camera manufacturing has been added to enhance the Colour Density Sensor in the new printers.

The two 24-inch models also feature larger ink tanks and a new Spectrophotometer on the iPF6450 has been especially developed for the Canon printers by X-Rite.

‘Hot Swap’ technology is now standard across the range enabling ink tanks to be replaced without interrupting print jobs and reducing waste.

The new printers can be ordered either directly from Canon or through Authorised Canon Partners.