Nikon Australia has announced four new Coolpix cameras including the rumoured S800c Android model, plus the S6400, the S01 and the P7700. 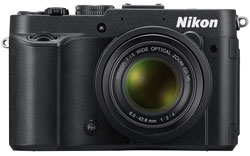 Unfortunately, the brochure material from Nikon did not include availability details (except for ‘soon’!), nor local pricing.

The P7700 is the newest Coolpix flagship model, replacing the P7100. It supports full-scale manual photography as well as system expansion.

It is equipped with a relatively large (7.6 x 5.7mm) 12 megapixel backside illumination CMOS sensor, and a fast (f2 – 4) 7.1x optical zoom lens (28 – 200mm). It has built-in lens-shift vibration reduction (VR) and will shoot at up to 8 fps. The sensor is, in physical dimensions, considerably smaller than those in the Sony RX100 and Canon G1 X with which it competes.

The P7700 is also equipped with a movie custom setting mode with which settings such as shutter speed and ISO sensitivity can be specified, making the most of the advantages and capabilities of the fast lens and sensor.

The camera is compatible with a range of accessories including Nikon Speedlights, which can be used for multiple flash-unit photography with Advanced Wireless Lighting, the GPS Unit GP-1, which records position information with images as they are captured, and the Remote Cord MC-DC2, which makes releasing the shutter easier when the camera is mounted on a tripod.

US suggested retail price is US$500. Available there in September.

The S800c establishes a new line in the Coolpix S series powered by Android with built-in Wi-Fi compatibility, for operation similar to that of a smartphone with wireless Internet connection. (Though as Nikon notes, far superior functionality and image quality compared  to a phone!) It has a backside-illumination 16-megapixel CMOS sensor and 10x optical zoom.

The communications technologies in the camera allow users to send images and video clips to social networking sites and support image browsing when connected. Users can customise their cameras with downloadable apps from Google Play to extend their options.

An Upload to Smart Device app enables images to be transferred from the camera to an Android or iOS smart-phone or tablet. The camera also includes a GPS module for tagging images with positional data. The S800c can record Full (1080p) HD movies with stereo soundtracks and includes options for recording slow-motion videos that play back at 1/2, 1/4 or 1/8 normal speed and high-speed movies that play at twice normal speed.

US suggested price is US$350. Available there in September.

The slimline S6400 also has the same 16-megapixel backside-illumination CMOS image sensor and a 12x optical zoom lens (25 mm to 300 mm) and a touch panel display.

The S01 is ‘the smallest and lightest digital camera in the history of the Nikon Coolpix series’. The body is smaller than a standard business card, measuring approximately 77mm x 51mm x 17mm and weighs 96g.

It is constructed of a stainless steel which delivers an attractive finish, and is equipped with a touch panel display.

This camera includes an EXPEED C2 image processor that supports a wide range of special effects and automatic scene detection. A built-in xenon flash is also provided. HD movies can be recorded with 1280 x 720 pixel resolution.

US suggested price is US$180. Available there in September.

As noted, Nikon Australia has provided no information on the release dates or pricing for these cameras but they may appear on the MyNikonLife website at some stage.