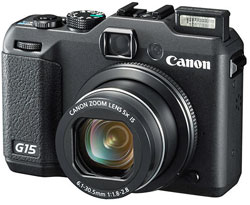 The PowerShot G15 has the same 28mm optical 5x zoom lens as the PowerShot G12 which it replaces, but it’s a faster lens with an impressive  maximum aperture range of f1.8 (W) to f2.8 (T). This is achieved through new high-refraction glass, which has also enabled the overall length of the lens at maximum telephoto to be reduced. Proprietary coatings subdue reflections from light entering the lens at an angle, minimising flare and ghosting. The 12.1-megapixel PowerShot G15 has a 1/1.7-inch type (7.6 x 5.7 mm) Canon CMOS sensor and DIGIC 5 processor. Canon’s HS (High Sensitivity) system supports high ISO speed shooting at ISO 12,800 and continuous shooting at up to 10 frames/second in the High Speed Burst HQ mode. Full HD 1080 movie recording is available with fine detail movie processing.

The G15 claims an autofocus time of 0.17 seconds at wide angle or 0.36 seconds at the telephoto position. It comes with Intelligent IS (image stabilisation) and offers a whopping 58 Scene Smart Auto shooting modes plus full manual controls. Multi aspect RAW recording is a new feature in this camera, which is also compatible with a number of EOS accessories, which can be fitted via the on-board hot-shoe. The PowerShot G15 will be available from mid-October 2012. 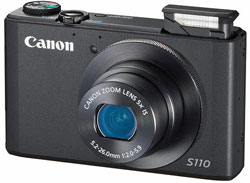 The PowerShot S110 updates the S-series of PowerShots with the addition of wireless connectivity and a capacitive touch screen that works in synergy with the front control ring to allow integrated full manual control. The front control ring can be assigned to handle changes across multiple features, including aperture, shutter speed, focus and zoom. The addition of Wi-Fi connectivity allows both wireless printing and wireless image transfer to smart devices or home computers. Using the free downloadable Canon CameraWindow application, the S110 partners with a smart-phone for image transfer and also has the new addition of GPS tagging via the application.

Equipped with a 12.1-megapixel Canon CMOS sensor and DIGIC 5 processor, the S110 has a Canon 5x optical zoom lens and Optical Hybrid Image Stabiliser. It supports high ISO speed shooting at ISO 12,800 and continuous shooting at up to 10 frames/second in the High Speed Burst HQ mode. This camera will be available from late September, 2012. 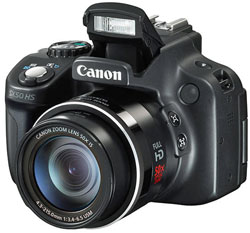 The PowerShot SX50 HS replaces the SX40 HS and slots in above the recently-announced 30x zoom SX500 IS model, offering a massive 50x optical zoom range, claimed as the world’s largest. Maximum telephoto length is 1200mm! Intelligent IS (image stabilisation) minimises the effects of camera shake while Canon’s ZoomPlus technology roughly doubles the range of the optical zoom. Canon’s two Framing Assist functions, Seek and Lock, are provided to help users take advantage of the extended zoom range. Holding the Seek button automatically assists the user to re-frame their shot on their chosen subject without zooming back and forth or losing focus. The Framing Assist Lock button further reduces camera shake at the final moment of taking the shot.