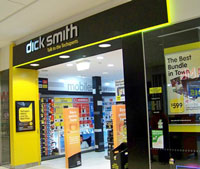 Brokerage and investment analyst CSLA has suggested Woolworths will close almost half of its 386 Dick Smith stores in Australia and New Zealand, while long-standing Harvey Norman critic Macquaries Securites has declared the fees extracted from the chain’s franchisees are unsustainable, given endemic discounting in low margin categories.

The CSLA report on DSE says the stores should be closed given Dick Smith is generating such a small return for Woolworths. The group contributed just $22 million to Woolworths consolidated earnings of $3 billion.

‘Woolworths will close up to 189 stores (out of 386) that are deemed unviable and invest significant effort in pursuing an online strategy to support the “bricks and mortar” presence,’ the CSLA report suggested.

This would have quite profound implications for the structure of photo retailing in Australia, with at least some of these Dick Smith stores running minilab equipment, and almost all selling cameras.

The shutting down of 50 to 100 minilabs around the country would be beneficial to competitors in the local area.

According to CLSA, Woolworths says the underperforming Dick Smith stores are too large, too small or in the wrong location.

The results of the formal review of Dick Smith are due to be released in February.

Macquarie Securities overview of 2011 Christmas trading (‘Who will be the last man standing?’), claims that Harvey Norman franchisees’ cost of doing business (CODB) has risen to be more than the gross margins charged at rival retailer JB Hi-Fi.

‘Assuming these were around 3 percent of sales, a franchisee’s CODB would be 22.47 per cent — this is higher than the gross margins earned by competitor JB Hi-Fi.’

The report supports persistent rumours of dissatisfaction among some Harvey Norman franchisees in the CE and photo categories.