A local consortium, MyMyk, has designed and commissioned manufacture of a microphone specifically created for DSLR cameras shooting video. 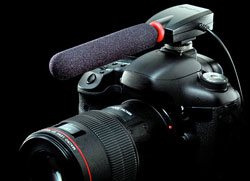 The Smart Myk is a directional microphone which works by localising the sound to the image, rejecting background noise to concentrate on the sound from the subject of the camera’s focus. It easily attaches to any DSLR/video camera, making it perfect for professional recording, home videos, internet broadcasting, sporting events and much more.

The SmartMyk delivers HD (Highly Defined) quality audio which is an authentic replication of the original source, according to the MyMyk website. ‘The result is stunning sound that you never before thought possible, perfectly complementing the HD video of your production.’

Background noise has proven to be a significant obstacle to shooting video on DSLRs, with in-built microphones tending to pick up everything around them.

The SmartMyk weighs just 60g, making it one of the lightest condenser microphones of its type on the market today. The body, tube and housing of the microphone are made of polycarbonate ABS material which is extremely lightweight, while at the same time remaining strong and robust. There is no need to detach the microphone before packing it away; unlike many other microphones on the market, the profile of the SmartMyk is so small that it comfortably fits into most camera bags still attached to the camera.

The SmartMyk is powered by the widely-used CR 2032 button cell battery, which provides a battery life of approximately 200 hours of continuous use.

The SmartMyk is designed in Australia by a consortium of industry professionals from the sound, film and broadcast industries, combined with a team of highly skilled industrial and electronic designers with major contributions from many of Australia’s leading location sound recordists and cameramen.

One of the principals of MyMyk, CEO David Green, has previously helped develop microphones for Rode Microphones and Sennheiser.

‘Shooting video on DSLR is so important that it could be considered the next break-through in communications and media enhancement,’ David Green told Photo Counter.

‘The tools as we know are still evolving.The camera manufactures did not plan for this uptake for the usage of these cameras as video format cameras, and as such have not implemented all of the components needed to do when maximising the use of the DSLR cameras.

‘…Both Canon and Nikon have released cameras that have addressed some new features but they still do not have a complete solution for the audio.

‘DSLR video shooting has never been more exciting,’ he cpontinued. ‘The cinematographer now has at his hands all of the incredible tools that have been the mostly the domain of a still shot photographer. Reciprocally, still photographers can use their photographic skills, now shoot in HD 1080 format and have opportunity to become film makers to make quality films to view and enjoy.

‘The implementation of audio to these pictures is not a complicated leap but it does require a total re-think of how sound is delivered and captured,’ he explained.

He says that MyMyk’s R&D development program will bring a number of ‘radical new innovative products relevant to the photographic industry to the market in the next several months.’

A well-regarded local distributor with strong connections to the photo industry has been appointed. Deatils on stock availability and RRPs is still to come, but the SmartMyk is expected to be available to retailers in the next few weeks.