Kodak Australia has announced several changes to its distribution and organisational structure ‘to further improve productivity, strengthen its position and drive growth in the Australian photographic market.’ 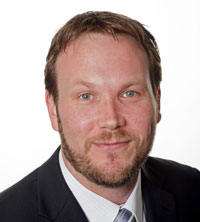 Kodak Australia has appointed Independent Photo (IPS) as an authorised distributor for the full range of Kodak Paper & Output Systems (P&OS) and Retail Systems Solutions (RSS) products to the photo speciality market in Australia, in addition to their recent appointment to that role in New Zealand.

‘We look forward to strengthening our relationship with Kodak Australia in the distribution of its thermal media, paper and chemistry supplies. We are well placed to meet the business needs of Kodak customers across Australia,’ said Stuart Holmes, managing director, Independent Photo.

As part of the consolidation of distribution, Kodak Australia and Australian Photo Supplies (APS) have agreed to end their long-standing relationship.

‘We’ve had a sound alliance with APS and would like to publicly thank them for their contribution to our business over many years,’ said Adrian Fleming, managing director, Kodak Australasia (pictured above right).

APS managing director Robert Dessmann was keen to communicate that the ending of the Kodak alliance was by no means an indication that his company was moving away from the photo channel.

‘We are committed to the photo channel and will continue to supply a whole range of products. He added that APS had plenty of stock of Kodak paper and chemistry with which they could supply customers ‘right through to the end of the year.’

He also flagged forthcoming major announcements of new distributorships, and said APS would continue to offer customers a range of paper and chemistry.

APS was formed by a group of ex-Kodak distribution and marketing executives, headed up by Robert Dessmann, former supply chain manager for Kodak Australia.

Arrangements with Kodak Australia’s other authorised distributors, UCC (mass merchants) and C-Direct (pharmacy) remain unchanged and they will continue to supply Kodak products to their respective channels of distribution.

In other organisational announcements Clyde Rodrigues, business development director, will be leaving Kodak to join UCC as sales and marketing director, handling the distribution of Kodak products to mass retailers throughout Australia. John Clifford, consumer sales director, will also be leaving Kodak. (These were revealed last week in Photo Counter.)

‘Clyde and John have been valuable team members, and we wish them well in their future career endeavours,’ said Adrian Fleming.

Kodak Australia has realigned the POS & RSS team leaders’ responsibilities to more effectively support the new consolidated distribution structure as follows:
– Danielle Withey will take the role of acting leader for the POS and RSS businesses, in addition to her Asia Pacific product management responsibilities, until such time as a permanent leader is appointed.
– Peter Cocklin leads the POS business (both Professional and Consumer), in addition to account management of IPS.
– Mark Maxwell heads the RSS business in addition to account management of UCC.
– Mark Parisi is responsible for C-Direct.
– Grant Campbell manages the POS and RSS businesses in New Zealand.

‘Kodak Australia remains fully committed to delivering industry leading solutions to the photo specialty, professional and wholesale labs market,’ said Adrian Fleming. ‘The combination of experience and capabilities in both the Kodak and authorised distributor teams gives me a high level of confidence in the business and opportunities for growth going forward.‘