The GST Distribution Review into inefficiencies and weaknesses in the Goods and Services Tax, conducted by Nick Greiner, John Brumby and Bruce Carter, has directly countered the LVPPT (Low Value Parcel Processing Taskforce), with a call for an immediate reduction in the GST threshold to $500, and an eventual $20 limit. 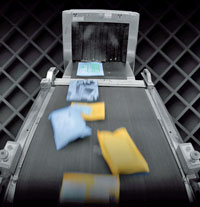 We present the pertinent section of the Review in full:

Preventing the leakage of GST revenue from online imports

High priority should be given to measures that reduce the erosion of GST collections from overseas internet purchases. Not only does the current situation place domestic suppliers at a competitive disadvantage, this loophole is costing the States hundreds of millions of dollars in lost revenue.

The Panel’s views on how this issue should be addressed are set out below, in two parts:
First, the current low value import threshold could (and in the Panel’s view, should) be at least halved. This could be done almost immediately and would ameliorate the problem without requiring any structural changes to either the existing GST law or customs arrangements.

Secondly, the Panel urges both the Commonwealth and the States to consider how best to bring Australia into line with international practice in this area. Over the medium term, innovative ways of ensuring a level‑playing field and preventing revenue loss need to be found. One option worth close consideration would be to replace the current approach to collecting GST ‘at the border’ with one that imposed a GST liability directly on overseas suppliers of goods and services to Australians.

In 2011 the Commonwealth Government established a taskforce to examine this issue. The LVPPT report was published in July 2012 and a response from the Commonwealth is awaited at the time of finalising this report. During the deliberations of the LVPPT, this Panel made available to them an analysis commissioned by us on the issue of collecting GST on low value imports. This work suggested various ways to reduce the GST base erosion.

The current threshold of $1000 is out of line with overseas standards and seems open to flagrant abuse. The Panel has become aware of a number of practices, including overseas arrangements for parcelling purchases in amounts that will not trigger the threshold. Expensive cameras, for example, costing much more than the threshold can currently be purchased in their component parts and assembled by the purchaser without incurring any GST as long as each component (such as the body, lens, motor, battery and filters, etc.) can each be purchased for less than $1000. Anything other than a very low tax free threshold is exposed to such practices.

The final report of the LVPPT suggests that if the low value threshold were reduced to (say) $500, the additional GST collected would exceed the additional administration costs that would be incurred. There would be a net revenue benefit as a result, but it may not be large – perhaps around $30 million per annum. Beyond this, according to the LVPPT, lowering the threshold further would generate additional revenue, but administrative costs would increase by more, making that approach less attractive from a net revenue point of view.

The Panel accepts that the driver of overseas purchases is not necessarily GST, as often the direct import overseas price including GST would be less than the local purchase price. We are under no illusions that lowering the threshold would be a panacea to local retailers, as has sometimes been suggested. But to some extent this is beside the point. We can see no reason why the GST should not be paid on this category of domestic consumption as long as the costs of collection are lower than the tax paid. We therefore think that the GST low value import threshold should be lowered immediately to the lowest practical level that would increase the overall (net) size of the GST pool.

Recommendation 11.2
That the low value import threshold for GST be lowered to prevent the ongoing erosion of the GST pool. Initially, the threshold should be lowered so that it does not exceed $500. This should occur as soon as practicable.

The LVPPT noted that overseas suppliers may already agree to voluntarily pay GST (on parcels worth more than $1000) to facilitate streamlined importation and processing of goods through customs. However, it dealt only tangentially with a number of proposals for making this mandatory — that is, overseas suppliers to Australian residents would be made directly liable for Australian tax.

The Panel is inclined to the view that collecting GST and other taxes on imports physically at the border is not the long term solution. This is a product both of the rapidly increasing volume of relatively low‑value physical goods that are imported after being purchased by individuals online, as well as the growing consumption of intangible goods and services (such as ebooks, for example). The amount of money at stake for the States is already significant and, if left unaddressed, could continue to increase.

Ultimately, only placing direct liability on overseas suppliers will address the avoidance of GST on intangible imports such as online purchases of music, videos and other software. If this occurred, then the administratively costly collection of GST at the border would no longer be required for ‘GST paid’ imports of any value.

The Panel considers that the cooperation of overseas suppliers could be forthcoming for the bulk of transactions, but accepts that incentives for compliance would need to be put in place with the direct liability approach.

Recommendation 11.3
That the Commonwealth and the States jointly examine as a matter of priority ways to secure the GST revenue base against its continuing erosion through the growth in imports purchased online.

This examination should include considering amendments to the GST law so as to make overseas suppliers to Australian residents liable for remittance of GST on all supplies of both goods and services that would otherwise be subject to GST if purchased from a domestic supplier. Such an approach would enable the GST exemption threshold for physical parcels to be reduced to a nominal level, no more than $20 or $50.