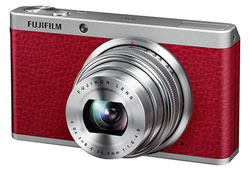 This lens covers a focal length range equivalent to 25-100mm and the camera’s Intelligent Digital Zoom supports a doubling of this range to 200mm equivalent. The fast f1.8 maximum aperture at the wide-angle setting combines with a six-bladed iris diaphragm to deliver attractive bokeh. The lens can focus to within 3cm of subjects for close-up shots. Fujifilm’s High Speed Contrast Detection AF claims to be able to lock onto subjects in 0.16 seconds at a maximum 4x zoom and boasts a minimum shot-to-shot time of just 0.8 seconds.

The camera’s compact aluminium body with leather-look casing continues the retro styling that has made the X-series cameras popular among photo enthusiasts and professional photographers. (The small sensor in the XF1 may be off-putting for this group, however.) The camera body offers three configurations. In Travel mode, the lens retracts fully for ease of portability. In Standby mode, a simple touch of the zoom ring opens the lens and activates the camera into Shooting mode which powers up in 0.51 seconds.

The Fujifilm XF1 provides plenty of multi-function manual controls and features a main command dial that allows easy adjustments of shutter speed and aperture. Up to six frequently used settings can be assigned to the expanded function button. The XF1 can record Full HD movies at 1920 x 1080 pixels and also supports 1280 x 720 pixel and VGA resolutions, all with a frame rate of 30 frames/sec.) and with stereo sound. Optical zoom function (manual) can be used.

The 2/3-inch EXR CMOS sensor in the XF1 supports Fujifilm’s three switchable sensor modes for advanced photographers: SN high sensitivity/low noise for low light, DR dynamic range for high contrast scenes and HR resolution for well-lit conditions. An additional EXR Auto mode is provided for snapshooters in which the optimum setting is selected from 103 scene patterns, pre-loaded in the camera.

Also built into the camera is an Advanced Filter option with 11 pre-sets that includePop colour, Toy camera, Miniature, High-key, Dynamic tone and six partial colour settings for B&W shooting with highlights in Red, Orange, Yellow, Green, Blue or Purple. The effects of the filters can be previewed on the 3-inch, 460-dot LCD monitor, which has a cover made from tempered glass.

Fujifilm’s new XF1 will be available for purchase in November at an RRP of AU$549.