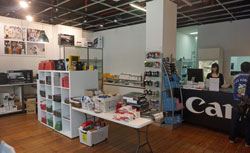 Foto Riesel continues to trade from its premises at 364a Kent Street. Create uses the same premises a couple of doors up from Foto Riesel where a Foto Riesel/Canon printing centre used to operate.

Foto Riesel’s owner, John Wallace, scoped the project with assistance from Independent Photo (IPS) in designing the lab and workflow systems to integrate the new QSS3801 (the first in Australia). The high-definition minilab delivers prints at up to 640dpi – twice the resolution of most wet minilab printers.

It can scan and print up to 12 x 36-inch prints, with larger jobs handled on the Canon 8300 wide format printer.

Two Noritsu film processors were sourced and customised by Independent Photo (C-41 and  B & W) to allow Create staff to develop, scan and print film up to 120 format in-house with rapid turnaround.

‘Customers are delighted with the quality of the professionally finished, “real”  photographic prints that the lab is producing – both from scanned negatives and digital files,’ said Rob Voysey, Independent Photo.

‘There is no doubt that film is back for the discerning new age photographer.’

‘With such resurgence in print and film, we are really excited to offer a full suite of services to photographers. The lab is a great step forward for both the professional market and enthusiasts as well,’ said Mr Wallace. 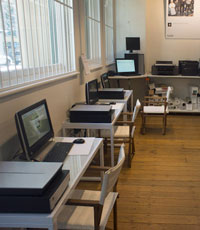 Foto Riesel has chosen Dakis (once again via Independent Photo) as the online retailing platform for Create, and three Dakis-based DIY workstations allow photographers to edit and upload images as well as scan their own film using Epson V700 scanners. Those that can’t come into the store will be able to upload from work or home via www.createcentre.com.au.

‘Printing can be delivered overnight via courier service to Sydney metropolitan areas or we can deliver to just about anywhere in the world,’ continued Mr Wallace. ‘This means whether you’re shooting as a photojournalist in a remote part of the world or whether you’re on holidays with your family, the highest quality prints will be available ready and waiting for you when you return – or delivered to your door.’

As well as state-of-the-art printing, Create has a full range of Ilford and Kodak film, Sydney’s biggest range of Lomography cameras and film, as well as Holga cameras.  Create also caters for digital printers with an extensive range of Hannemuhle and Ilford paper, along with Epson and Canon professional inks.

‘Traditional black and white darkroom paper and chemistry are also in good supply and we are seeing a huge revival in sales in these products,’ added Mr Wallace.

As an opening special, any orders put through Create kiosks in store or online will receive a 25 percent discount until October 31.