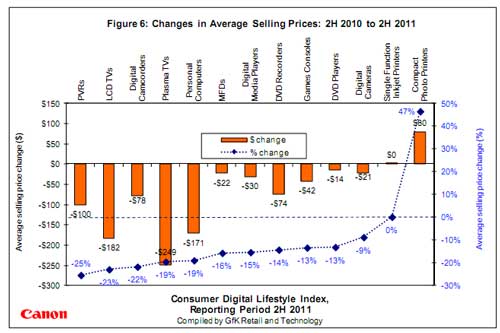 More products are being purchased at local retail stores (the CDLI does not measure online-offshore or online-only local retailers). Unit sales in the CDLI categories – digital cameras, camcorders, printers, personal computers (including tablet PCs), TVs, digital media players and game consoles – increased by over 700,000 compared to 2010.

However, the total spend has fallen 13.5 percent across all categories – in an economy with inflation running at 3.1 percent.

With sales of more than 1.4 million units, the Digital Camera category remains in the top-three for the ninth consecutive year despite market maturity, private imports, household penetration of around 80 percent and the proliferation of smartphones.

”When you consider that since 2003 the Average Selling Prices for digital cameras and plasma TVs have fallen 68 percent and 90 percent, respectively, we can see just how much the market has moved.’

McLean believes that the consumer technology market has endured thanks to local investment by the industry and an innovation cycle that offers significant reasons to upgrade. However, this has taken place against the backdrop of severe price deflation and increased costs of doing business.

‘There’s clearly an adjustment taking place as the technology market moves to address global price disparities, with average selling prices declining across the index each month for the past 24 months,’ said Mr McLean.

‘While prices are moving to find their natural point of balance, our market is forced to contend with competitive disadvantages in the form of higher costs of doing business and the GST exemption for imported products under $1000.’

A recent report by Ernst & Young for the National Retail Association stated that the high tax-free import threshold in Australia is a ‘significant component’ in the difference between Australian and overseas online retailers ‘equating to 14 percent of the sale price on average’.

‘As an industry we’re absorbing the price deflation straight to the bottom line and at some point this could threaten the viability of local operations,’ he said, adding that ‘the warning signs are there now.’

Mr McLean believes that misleading online price comparisons may prevent some consumers from discovering the real value that is available in their local stores:

‘It is common to see unfair price comparisons using local RRP versus tax-free selling prices in the global market,’ he said. ‘The price paid at the register is the only fair price for comparison and I encourage consumers to always check the value to be had in-store. So far this year, Canon has taken price action more than once on popular products and we continue to work with our retailer partners to drive value for Australian consumers.’

Other digital imaging-related findings of the CDLI report include:
– The mass image-capture trend is now deeply embedded as a digital lifestyle trend, with consumers now taking an average of 146 photos per month (up 57 percent vs. 1H 2008), with DSLR photographers taking a significant 288 photos per month on average.
– Quality continues to drive digital still camera purchases (78 percent of new camera purchasers indicate Quality is either Very Important or Extremely Important in the Digital Camera buying process) and strong sales volume amid 80%+ market penetration and camera-equipped phones in every pocket.
– Compact photo printers and single function inkjet printers posted significantly lower sales volumes (down 62 percent and 44 percent respectively) reflecting the consumer shift towards MFDs.
– Digital camcorder volumes declined by 9 percent in 2H 2011, (although there was a 25 percent volume increase in the higher image-quality Full-HD camcorders.