CR Kennedy will use The Digital Show as a platform to announce its appointment as Australian distributor of Eye-Fi wireless SDHC cards. 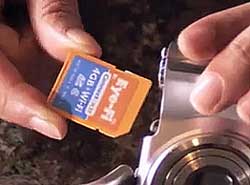 Eye-Fi has been slow to bring its wireless memory cards to the Australian market, resulting in lost sales to overseas sellers. Photo Counter understands that several Australian distributors have made unsuccessful overtures to Eye-Fi in the past.

Eye-Fi cards are a perfect fit for specialist retailers, as they essentially make any camera wireless, enabling users to take photos on their camera and instantly share online or upload to their PC, smartphone or tablet. In addition images can be uploaded to a selection of 25 social networking sites including Facebook and Flickr.

Though Eye-Fi cards are relatively expensive, they enable consumers and professionals (there is a model which handles RAW files as well as JPEGs and video formats) to ‘upgrade’ their existing camera to a wireless function, and because images are so readily and easily downloadable, fewer cards overall will be required. The cards can be configured so thye automatically start downloading imagfes once a nominated capacity has been  achieved.

CR Kennedy says that Eye-Fi cards will be in Australia in June. Ziv Gallat, co-founder and VP of product development, Eye-FI USA, will be attending PMA on Friday to demonstrate Eye-Fi cards.

Eye-Fi cards look, store media (Class 6), and fit into cameras just like a regular SDHC card. During the quick set-up, the photographer customises where they want their images sent. The Eye-Fi card will only send them to the computer and to the sharing site choosen.

Eye-Fi cards come in 4TGB and 8GB capacity, with the Pro version offering automatic geotagging and direct wifi hot-spot access (to be confirmed for Australian networks)