This week we conclude our report on the PMA Digital Conference keynote session, ‘Competing With Online Stores‘, in which presenter Chris Wilkinson (First Retail) looks at ‘game changers’ – the things which are influencing consumer behaviour right now – and some strategies to reduce the risk and leverage the opportunity from online retailing.

Mr Wilkinson noted that one major step which hasn’t yet occurred in Australia but has in other countries such as the UK, is the move of grocery stores online, offering home delivery. This serves to make the concept of online shopping more mainstream.

He called this a ‘tipping point’, with other big retailers like Staples and OfficeMax also  examples of this kind of ‘mainstreaming’ of online shopping.

Whether that tipping point towards the mainstream is here now or on the horizon, ‘it will change the market forever’, he said.

Consumer behaviour was already changing in the imaging sector in Australia via the online offerings and price advantage of Snapfish and CE operators like Harvey Norman and Big W, which are pushed out to their customer databases via electronic mail on a regular schedule.

But it’s not only price, but the convenience of being able to order from the home or the office and access to a broader range which give online an advantage.

Other game-changers currently in play include Daily Deal sites and auction sites driving a growth in second-hand sales.

He said it was critical that Facebook and Twitter be incorporated onto the home pages of websites, and ‘when people order their pictures through an app, it’s a game changer for our industry.’

He challenged the audience on assumptions of the superiority and unmatchable nature of the bricks and mortar shopping experience.

‘We have been convincing ourselves for many years that you can’t get the same type of experience [online] as when they walk into our stores. That’s not true.,.’ said Mr Wilkinson.

He said a good website had an exceptional store front (appearance and design), and a wealth of knowledge resources ‘if you don’t want to talk to someone.

‘But you can also interact – and that’s a key issue.’ He exampled Ted’s Cameras and Camera House websites’ ‘Talk to an Expert’ – type tools as good examples of how a good website can measure up to a physical store.

But Mr Wilkinson was putting the argument that a good physical store and a good web presence will beat a standalone website, and presented the following ‘key facts’ as a guide: 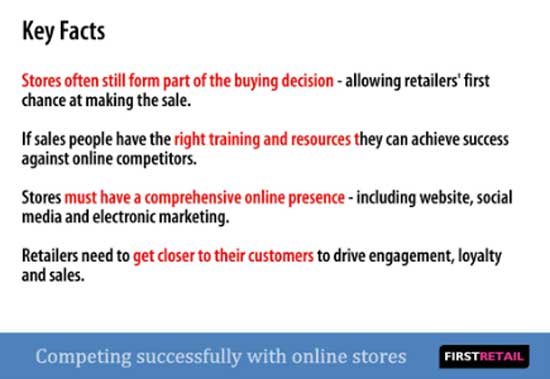 ‘Our location is one of our prime resources,’ said Mr Gresham. “Eighty percent of oders are picked up in store. That’s one of our plusses – that people can pick up in store –  and we are very fast . (We called the business Fotofast for a reason!).’;

The said one of the keys to the continued success of Fotofast was the speed with which it changed product lines in response to competition and consumer demand.

‘When we see something being bastardised out there by the big boys, like canvas, we change things by introducing a lot of different templates… collages… basiclly selling a product range that can’t be matched.

‘Harvey Norman and Officeworks and Big W – all  these people are in my face as they are with a lot of people, but the fact is we produce on-site, and we are very quick to react to the market. As the others catch up we’ve just got to keep moving on. We’ve got to be quick on our feet.

‘And I think that’s why I am still in the industry – it’s still fun and it’s evolving. We’ve only just touched the surface.

‘We can be quite competitive because there are margins. Now selling hardware – that’s a much harder thing to move because you can compare apples with apples. With online output it’s much easier to be a little bit different.’

Taking the floor for the last third of his presentation, Chris Wilkinson reminded the audience that, stacked up against all the change and churn in the market, traditional retailing had a competitive edge in the form of closer customer relationships, the ability to develop customised solutions in-store, the ability to leverage added value, immediate gratification, and the intrinsically interactive experience of buying from a store.

He said there were three steps to managing risk in the new retail environment, around company culture; in-store strategies; and ‘reaching out’.

The critical areas in which the culture of the company could assist success were:

In store, Mr Wilkinson said, more focus had to be given to integrating the online part of the business by:

He added that he thought retailers should give more thought to the content of POS messaging in store.

‘ We focus very heavily on technical aspects – but what about the delight? Remember the delight we saw when people used to pick up their photos.

He said we still see it now (if less regularly!) when customers pick up their photo books, but the focus on the excitement of photography could be sharpened.

The ‘reaching out’ step in competing in the new retail environment required retailers to keep abreast of the dynamics and developments in marketing, technology and changing consumer behaviour.

‘We’ve got to understand the dynamics,’ he said. ‘That’s about reading; it’s about talking to fellow retailers and it’s about looking outside our industry – because the leading light is not coming from photo, it’s coming from other sectors.’

Mr Wilkinson concluded with a comprehensive list of actions and behaviours for retailers to introduce to their businesses to more successfully compete with online stores: 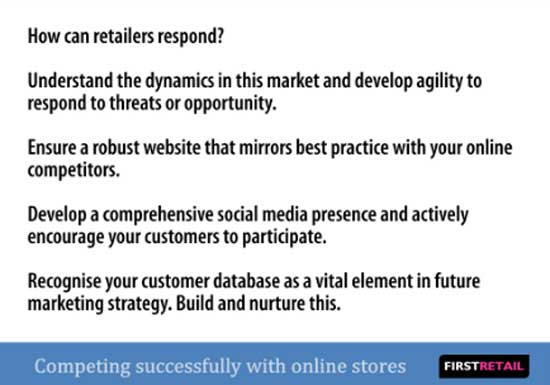 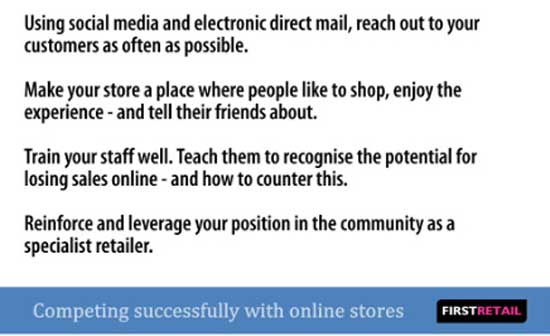