January 10, 2012: Samsung has announced additions to its compact digicam and digital camcorder ranges, slated for local release between February and April. 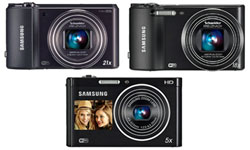 Samsung’s Q20 camcorder features a new Switch Grip 2 which increases flexibility to three recording angles-horizontal, vertical and left-to-right. This model features 1080i Full HD recording, a 20x optical zoom lens and creative functions in a slim and portable body. The F80 is a family-friendly camcorder with 720p HD capabilities and upgraded image quality in an affordable package. The F80 will be available at an RRP $219 from February, 2012 and the Q20 will be available for $329 from March, 2012.

Full details of all products are available at the Samsung Australia microsite at: http://samsungaustraliaces2012.com.au/.