Canon Australia has announced late-June Australasian arrival of the EOS 650D, the first EOS with touch screen navigation. It will sit between the EOS 600D and the 60D in the Canon range. 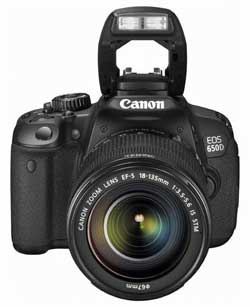 Canon says the 650D introduces significant quality and performance enhancements to suit hobbyists, while easy-to-use functions allow photography newcomers to take the shots that only a DSLR camera can achieve.

‘This camera has arrived at the right time given the rapid growth in entry-level and hobbyist photographers in the DSLR category in Australia,’ said Rebecca Pearson, assistant brand manager, EOS, Canon Australia. ‘New features such as full HD video with AF and touch-screen navigation will inspire even more photographers and videographers to explore the creative options made possible with DSLR cameras and lenses.’

For the first time in an entry-level EOS, the AF system adopts a 9 point all cross-type array for superior focusing performance through the viewfinder. The addition of the dual-cross point in the centre allows for much faster, precise focusing for photographers using high-speed f2.8 lenses.

‘Hybrid CMOS AF’ offers the most dramatic improvement to focusing with the LCD screen since Live View first appeared on EOS cameras. The technology combines the benefits of two different focusing systems – ‘phase detection’ and ‘contrast detection’ – to deliver focusing performance that is fast and accurate for stills and video, even when the subject is moving. Another EOS first is the Clear View II LCD Monitor featuring ‘Touch Screen’ operation, placing focusing control at the fingertips.

Movie capture is enhanced yet further, with on-board stereo sound, and silent AF performance when used in conjunction with one of Canon’s new ‘Stepping Motor’ lenses.

The 3-inch vari-angle screen is 1004K dot resolution and Canon says the electro-static touch-panel screen is the most advanced that Canon has released to date. It features multi-touch capabilities allowing photographers to use familiar gestures such as ‘pinch-to-zoom’ and ‘swiping’ to scroll between pictures. Camera operation has been simplified through this feature allowing for Touch Focus or Touch Shutter controls via the vari-angle touch-screen.

With the camera’s touch screen, users can touch the face of the person they would like to focus on and the camera will remain focused on them while they remain in-frame, ensuring sharp focus in crowds and group shots. The new AF system enables touch autofocus for shooting photos and movies in Live View. Touch Focus can be used in video mode, with or without an STM lens. However the effects of continuous AF will only be achieved with the use of an STM lens.

When shooting video with Canon’s STM lenses, AF also remains silent, helping ensure you only capture the sound of the scene being recorded. The EOS 650D features a built-in stereo microphone – a first for the EOS line – that includes an attenuator function to reduce audio distortion in extra loud situations.

Canon says the versatile EF-S 18-135mm is a great option for photographers who may only want to carry one lens with them for wide landscapes, portraits and close-ups. Appearing for the first time in a Canon EF lens is Dynamic IS (Movie Shooting Mode only), which uses a wide image stabilisation correction range to help ensure steady video even when shooting while walking.

The EF 40mm f2.8 ‘pancake-style’ lens is ideal for capturing portrait stills or movies. The lens is 2.28cm thick when attached, making it easy to carry and fit conveniently into a purse or pocket.

The EOS 650D is also compatible with Canon’s previously introduced GP-E2 GPS Receiver, which can be mounted to the camera’s accessory shoe. The GPS unit was created to serve outdoor photographers; it records shooting locations including latitude, longitude and altitude, as well as camera direction. A Logging function can tell how far a photographer has travelled as well.

The EOS 650D digital SLR camera will be available at the end of June in body only and three kit configurations:

The two new lenses will also be available separately at the end of June.

Instead of supplying RRPs in press releases, Canon has adopted a policy of stating ‘prices are set at dealer discretion.’ One dealer that has already posted a retail price is DCW, which is offering the EOS650D body-only at $899. (It’s US$849 on B&H.)