Camera sales were rising out of a trough in the second quarter of 2012, according to the regular GfK TEMAX report on technical consumer goods sales. 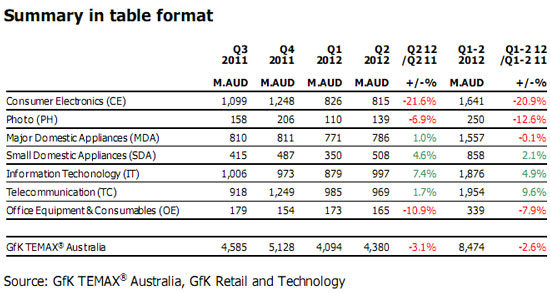 In the first quarter of this year the Photo category, dominated by camera sales, slumped 18.8 percent compared to the same period in 2011. This has been followed by a less alarming 6.9 percent fall when 2012 second quarter sales are compared against 2011.

Taken together, the first half of this year is 12.6 percent down in dollar terms compared to 2011.

‘As you rightly suggested, the decline is coming through the Fixed Lens area, in that $100-300 area,’ he wrote.

‘The sub $100 segment saw growth, as did the $300-$400 segment. We have also seen that “feature-based” cameras now represent much more value in the fixed lens market.

‘If you focus on higher zoom (10x and above) and tough (water and shockproof) fixed lens cameras, they represented nearly 60 percent of the market value in fixed lens in H1 2012 (compared to under half the market in H1 2011).

Shot from both sides

Retailers who sell both photo goods and what GfK defines as Consumer Electronics – largely televisions and accessories – have had a particularly tough time, with that sector falling from top of the tree in terms of sales to the third largest sector behind Telecommunications and IT.

Sales of web books and tablets in IT, and smartphones in Telecommunications helped lift  these categories – this appears to be where the discretionary ‘digital toy’ spend has been going over the past half-year.

But the smartphone market is approaching saturation. In the last quarter of 2011, phone sales were a phenomenal 65 percent up, while by the first quarter of this year, sales were still close to 20 percent up on the same period the previous year. By the second quarter, that growth had slipped to under 2 percent growth.

‘This reflects the maturing of the smartphone segment; the largest single value segment of the Australian technical consumer goods market,’ stated the GfK press release.

‘From low penetration levels in early 2011, when the rapid take-up of this new technology began, Australia is now reported to have one of the highest smartphone penetration rates in the world.’ 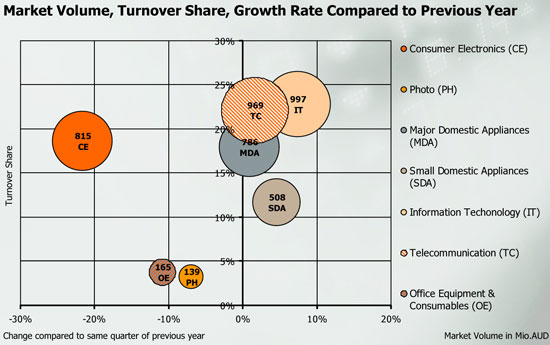 GfK makes the point that most of these smartphones have been purchased on 2-year contracts, which will impact the replacement cycle.

GfK further makes the point that the recent pace of change in technical consumer goods sales has been extraordinary:

‘The sheer rate of change taking place in the product structure of the TCG (technical consumer goods) market has placed Australian retailers under considerable pressure.

‘In addition, the products themselves are creating the environment for significant, and rapid, changes to consumer behaviour; with regard to both the path to purchase and place of purchase. Retailers and suppliers alike, will need to demonstrate continued understanding of, and flexibility to respond to, the complex environment they are now working within.

I think there might be a hint of an allusion to online sales here (‘complex environment’, ‘changing consumer behaviour’, ‘place of purchase’). This is where the GfK data doesn’t tell the whole story: it does not as yet include onlines sales. (Though I assume that sales from participating hybrid ‘bricks and clicks’ stores would be captured.)

Onlines sales – both domestic and offshore – are critical to a full understanding of the local camera market. Taken at face value, these TEMAX figures point to a camera market recovering from decline. The camera suppliers have reduced the attraction of online-offshore sales through 2012 by reducing the price differential on popular models. Could it be that the change from an 18.8 percent decline in quarter 1 to a 6.9 percent decline in quarter 2 is in part due to channel swapping – sales lost to offshore retailers ‘coming back’ to the domestic market as consumers realise the bargains aren’t there any more? If so, this could be a cause for celebration, and praise for the local camera suppliers’ endeavours. Maybe. Who knows?

GfK can’t be expected to provide more free research for us (what they supply already is valuable in the absence of other broadly available material), but it’s a pity that with over $1 million in the bank, there is $0 available from IDEA to research these crucial questions on behalf of the industry as a whole. The annual industry research investment was quietly dropped after 2010 – ‘due to lack of interest’ apparently. The funds required, which had been previously drawn from the profits from the annual photo show, were around $40,000 annually.