HE Perry, long-time New Zealand distributor for Olympus and Tamron, has relinquished these roles, with Tamron lenses now handled by Lacklands Ltd.

Servicing for Tamron lenses will continue to be provided by the former HE Perry service division, and Lacklands will honour all warranty repairs for products sold by HE Perry.

Olympus Australia is currently handling sales from its Australian headquarters, with camera repairs handled by A & E Electronics:  (03) 372-1213, service@aeelectronics.co.nz 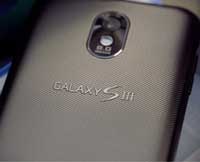 While most of the smartphone buzz is currently around Apple, Samsung enjoys almost three times the market share of the world’s largest company, and has knocked Nokia off its perch as leading mobile phone company after an extraordinary 14 years at the top.

‘Apple achieved its highest ever market share in the overall handset category, capturing 10 percent of global shipments during the first quarter of 2012,’ said Strategy Analytics.

Samsung captured 25 percent of the mobile phone market, making its the world’s number one handset vendor for the first time ever.

Given that Nokia used to make the provocative claim it was the leading digital camera vendor due to its sale of phones equipped with cameras, Samsung could easily make the same claim when its dedicated camera sales are combined with its smartphone sales. 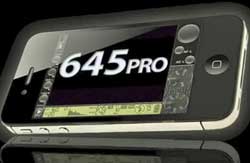 A new iPhone app – 645 Pro – promises to turn the not-so-humble iPhone into a pro camera, with ‘unprecedented control and unparalleled image quality. Kind of. The 645 Pro ‘feels like a pro camera — because it is one,’ the developer, Jag.gr claims.

While it doesn’t create a genuine, unadulterated raw file, it generates a ‘developed RAW’ file – a TIFF file with no JPEG compression.

Among the other features of the app are: spot and multi-zone metering; seven film modes, ‘inspired by classic film stock as used by top photographers from the 1960s through to the present day’; switchable ‘backs’ emulating five medium-format ratios; auto-exposure and autofocus locks; night mode; even live histograms and an on-screen grid to aid composition.

All controls appear on the iPhone screen and are controlled by various tapping routines and what Apple calls ‘hand gestures’.