Adeal was recently appointed distributor for MyMyk, an Australian company which has designed and developed a range of microphones and accessories specifically for use when shooting video using a DSLR. (See earlier story). 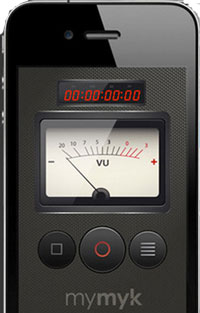 The Camera Audio station is a standalone audio recorder and file organisation system with the ability to record audio projects and tracks straight to a smartphone for future editing. Levels can be monitored while recording, with instant replay, and recordings can be geotagged. At the touch of a button files can be exported to an edit suite or another application for sound processing, editing or archiving.

Adeal has also announced the addition of maroon to its  Kata Light Pic shoulder bag range, and new camera straps from BlackRapid specially designed for lefties. 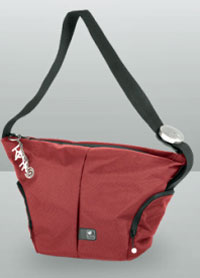 The maroon Kata Light Pic has a padded removable insert and can hold a compact DSLR with standard size lens attached and an extra accessory such as a flash unit with room for personal accessories. The insert can also be removed to use the bag as a fashionable everyday bag.

A top zip provides easy access to the camera and the strap comes with an adjustable buckle to transform the bag into messenger style, shoulder bag or purse.

The BlackRapid Sport-L and Sport 2-L camera straps are designed specifically to suit left-handed photographers. The ‘L’ straps sit on the right shoulder, allowing a photographer to grab the camera from the left side of the body. The Brad stabiliser strap anchors the pad to stay in place, especially when actively shooting. The Sport-L Camera straps complement BlackRapid’s Classic and Cargo camera straps that can be worn by left-handed shooters as well.

‘Due to decreasing demand globally we have to announce the withdrawal of some formats of Velvia 100F and Velvia 50. It is an unfortunate consequence of digital capture, that some of the slower selling silver-halide lines will drop off the radar. Fujiflm will continue to  manufacture a wide range of film and the increasing support for our Choose Film group illustrates there is still a passion for film photography across the world,’ said a Fujifilm UK spokesperson.

Eastman Kodak, currently under Chapter 11 bankruptcy administration, has lost a critical patent case against Apple and Research In Motion (Blackberry), putting in question its strategy of raising billions of dollars selling off patents.

Intellectual property sales has been presented by CEO Antonio Perez as the means to bring the company back from the brink of collapse.

Kodak filed a complaint against the two smartphone manufacturers at the US International Trade Commission in early 2010, saying their devices infringed on its patent for previewing images with a digital camera. The Commission has dismissed the complaint, finding the patent was invalid.

The patent at issue, Patent 218, is reported to be one of Kodak’s most valuable. Kodak has been extracting fees for use from smartphone makers in recent years. Samsung and LG Electronics have already contributed nearly $1 billion to Kodak for use of Patent 218.
The ruling brings into question how much money the company can raise from a patent auction that is expected to conclude next month. At one stage Kodak said the patents could be worth US$2.6 billion, but with the ‘jewel in the crown’ missing,that goal seems unlikely.

Kodak said the validity of its patent had been previously upheld and that it would appeal the ruling.

According to a report in small business website, Smart Company, more than 650 retail store closures have been announced since the beginning of the year, and more than 1600 workers left without jobs.

Myer’s announced last week that it would shed 100 staff.

The report says 2012 ‘is becoming one of the worst years for retail in recent history, as businesses struggle against higher costs and competitive pressures, including the growing presence of online companies.’

ARA executive director, Russell Zimmerman, quoted in the report, said cutbacks extended to smaller operations as well: ‘We talk to our members, and what we’re finding is that many businesses may say they had 15 stores last year, but they’ve shed that to just 12 or 13.

‘For many, it’s the costs involved in their tenancy agreements, and they’ve got deals they want to get out of. Others have pressures from online. The new awards are increasing costs. It’s an entire host of issues.’