Back in February, we were first in Australia to bring readers a report of the 41-megapixel Nokia Pureview 808 smartphone, and now image quality measurement specialist DxO Labs has run the exercise of comparing this ground-breaking camphone technology to some popular digital cameras. 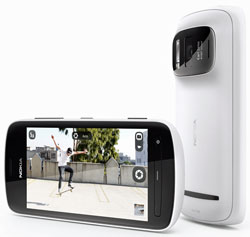 While the DxO Labs testing showed the Pureview 808 (pictured right) outperformed a high-end digital compact from several generations and five years ago – the Canon Powershot G5 – it’s bested by the 12-month-old Canon Powershot S100, and left in the dust by a DSLR, in this instance the Nikon D7000.

In a bare-chested megapixel-on-megapixel battle, DxO Labs compared a 12-megapixel smartphone – the Sony Xperia S – with the 12-megapixel, $500 Canon Powershot S100, finding that images from the Sony Xperia were marred by excessive image noise – almost four times the level of noise as produced by the trusty S100.

However, when it comes to shooting video, at least one popular current-model smartphone – the Samsung Galaxy SIII – performs better than one popular model compact camera, according to DxO Labs. When rated on video quality, for once the Powershot S100 fell short when compared to the Samsung Galaxy III, which DxO Labs said is the best smartphone on the market for shooting HD video.