Apple gets closer to picture-takers

Apple has had blanket coverage this morning for its ‘New Ipad’. (We understood the ABC didn’t run commercials!) We’ve waded through the near-impenetrable gobbledegook which Apple calls a press release to pick out the features in the new tablet and associated software which will be of interest to our photo retailing readership – and translated the Apple marketing dialect into something closer to English! 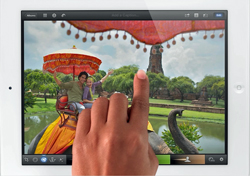 The New IPad has two major imaging features – a high resolution 9.7-inch screen and a five-megapixel camera. The screen is 2048×1536, or 3.1 million pixels – a million more than HDTV and four times that of the iPad 2. Apple says it delivers 44 percent greater colour saturation than the old iPad.

The New iPad also features the same 5-megapixel camera built into the iPhone 4S. It has a back-side illuminated sensor for improved low-light performance, face detection, an f2.4, 5-element lens and an infrared filter.

There are still no USB or card slots provided, limiting what users can actually do with their photos and keeping them herded inside the Apple ‘corall’.

Along with the New Ipad, Apple has increased the photo-functionality of a range of its devices with the introduction of ‘iPhoto for iPad and iPhone’.

IPhoto, along with major updates to iMovie (movie editor) and GarageBand (audio editor) completes the ‘suite of iLife apps for iOS’.

IPhoto is basically a touchscreen-operated picture editor. It runs on iPad 2 or later and iPhone 4 or later. It has been upgraded (in Apple-speak ‘re-imagined’ – or perhaps ‘re-iMagined’) for iOS to take full advantage of the high-resolution display in the New iPad and the touchscreen operation on the iPad and iPhone.

Simple finger movements (Apple uses the word ‘gestures’) can be used to select and compare photos side by side and mark best shots. IPhoto gives control over colour, exposure and contrast, and changes to specific parts of an image can be made by touching that part.

Pictures can be ‘enhanced with beautiful Apple-designed effects’ with a finger tap, or adjustments applied with fingertip brushes. In addition to posting photos to Facebook, Flickr and Twitter, photos can be transferred between an iPhone and iPad; and photos and slideshows can be streamed to an ‘Apple TV with AirPlay’ or photo journals can be published to the web – provided you have an iCloud account with Apple.