After 103 years, Winter’s bows out

When Colin Winter closes the doors of Winter’s Camera Centre, Burnie, on September 29, it will signal the end of three generations of photo retailing, stretching back over a century. 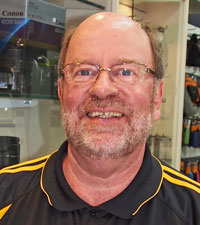 His grandfather started the business in August 1909. It has had several moves over the years, along with a period of expansion in the 1980s when they opened new outlets. They have leased the current store, in a prime city location, for the past 18 years.

Colin Winter (pictured right) has decided not to put the business ‘Australia’s oldest camera store’, on the market, but to simply close it down.

He said the option was there to take another three-year lease but that lacked appeal.

‘I could continue, but I just wanted a clean-cut finish,’ he said, noting that he had been doing shorter hours recently and ‘the staff do all the rest’.

This year is his 40th anniversary as owner of Winters, which he purchased from his father and brother in 1972.

Ultimately, Colin Winter, 62, encountered the classic dilemma for family-run businesses – no interest from the next generation in carrying it forward.

His daughter owns and operates a large and busy restaurant in partnership with her husband on the Burnie waterfront, and his son works as a chef at The Australian Embassy in the Hague on an extended posting.

I’d rather close than sell to someone,’ he said.

‘It’s been good to us so we’ll just close the door. I know previous generations of the family will be happy with that decision.’

He acknowledges that the closing of the only photo specialist outlet in town will leave a hole.

‘Who will fill the breach? The sad bit is there is really no one else.

‘Since I made my decision a few months ago I’ve been looking at all the people in shop and just admiring the way the staff go out of their way to help.

‘Harveys is just mass-produced. They don’t go that extra mile like we do.’

Reflecting back, he said that photography ‘has been a fabulous industry to work in’ and had been good to him. He identified the uptake of digital photography as a dramatic change, the rapidity of which was unanticipated, and lamented that some of the magic – watching as an image appears in the developing tray, picking up your prints from the photo store – had been lost as a result of the switch in technologies.

‘People don’t get to experience that any more,’ he said.

Winters Camera Centre has been a Kodak store through and through, and an early recruit to Leading Edge Digital when Kodak outsourced marketing and central ordering to the buying group.

‘The group has met all my expectations and beyond from when we first joined,’ he wrote when notifying Leading Edge of his decision. ‘The central billing is a vital component and along with the catalogues, buying power and most of all the assistance provided we have thoroughly enjoyed our time in the group.’

End of an Era

The following is Colin Winter’s farewell letter to his fellow retailers:

It is with mixed emotions that I have made a decision to retire at the end of September. This has not been an easy decision but one where I have put common sense ahead of sentiment. I wish to do a lot more travelling, playing golf, fishing, my artwork and all the other things you do in retirement whilst I am young enough, or more importantly fit enough, to enjoy it.

I have decided to close the store rather than sell and our last trading day will be September 29. The store will have been trading for 103 years, 1 month and 9 days, and as stated this is the end of an era for Australia’s oldest camera store, which was started by my grandfather on August 20, 1909.

I will continue trading with our mining division where we sell Rear Vision System Cameras and Monitors, and this will be done from a new location.

I have thoroughly enjoyed my 46 years in the industry and feel privileged to have met so many fantastic people and suppliers. I consider myself lucky to have experienced the transition of the industry over those years and have worked with plate cameras, contact printers with dish processing, right through to the digital world of today. Our company has always been the first to adopt the changes in our industry and has kept up with the latest technology available.

There is no secret to success in business: it is about having well-trained and presented staff who provide an exceptional service to customers and the store offering what customers want. I am indebted to our fabulous staff who have supported us over the many years.