DSLR video shooters get a dolly of their own

A US company, Cinetics, has developed a dolly (wheeled camera mount) for shooting video on a DSLR. 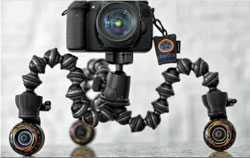 Dollies are used to achieve smooth, fluid tracking shots in moving pictures, and the CineSkates is basically a Joby Gorillapod tripod on wheels!

The system was invented by Justin Jensen, a mechanical engineer, photographer and film-maker from Austin, Texas. The complete kit consists of a GorillaPod Focus tripod, a BallHead X tripod head (also made and supplied by Joby), and three soft urethane CineSkates wheels. The wheels easily pop on and off of the tripod’s feet, for removal when not needed.
.
For people who already own a Focus tripod and/or a ballhead, the wheels can also be purchased on their own.

Eventually Cineskates will be made for other makes and models of tripods.

‘We are in touch, have ordered some demo units and are excited for him that the response is so brilliant. We will see what develops,’ said John Swainston, managing director of local Joby distributor, Maxwell International (whose parent, DayMen, recently acquired Joby). CineSkates is heading into production soon.

Another US company, Photography and Cinema, has taken a different route to a similar solution with the Pico Flex Dolly (pictured right). This takes the form of an aluminium four-wheeled camera platform – a ‘real’ dolly in miniature. Both sets of urethane wheels turn, and can be locked in position. A friction arm is also available for the unit.

There are a total of three mounting points on the platform, so additional arms holding remote flash or lights could also be added.